The Wizarding World has more than just Harry Potter movies, too! 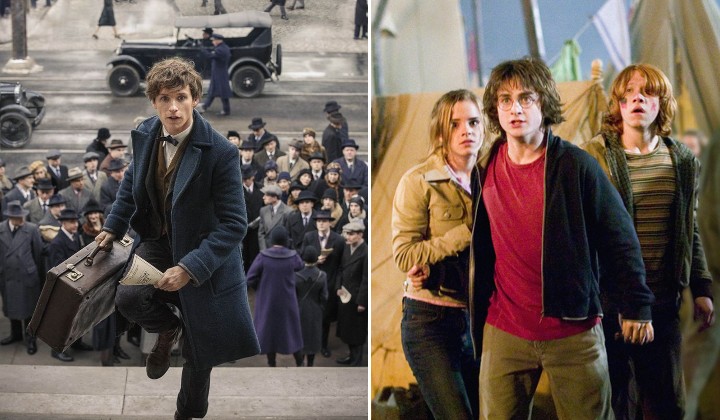 If you’re a Potterhead, you’ll know when the next Wizarding World movie is coming out, right? If you don’t, don’t worry, we’re muggles (human), after all.

For those who didn’t know, the new Fantastic Beasts (Fantastic Beasts: The Secrets Of Dumbledore) movie is going to hit the cinemas in Malaysia on 14th April 2022. That’s about a week away!

READ MORE: 15 Anticipated Movies Coming In The Cinemas This Year

So what are you waiting for? For those Potterheads (Harry Potter fans) and also those Wizarding World virgins who are interested in the Wizarding World of J.K. Rowling, let’s get on a marathon of the movies to catch up with the upcoming storyline.

To make sense of the new movie, you need to equip yourself with the storyline of two of its previous movies which are Fantastic Beasts: The Crimes of Grindelwald and Fantastic Beasts and Where to Find Them.

The Fantastic Beast series are in the same Wizarding World Universe but it’s not in the Harry Potter Universe. It’s actually a spin-off prequel five-film series (the new film being the third out of five) of the famous Harry Potter 8-film series (note that the book is only a series of 7). The timeline is set before there even was a Harry Potter.

Fun Fact: Fantastic Beasts and Where To Find Them was actually the name of a textbook from one of Harry Potter’s classes back in Hogwarts that explains the magical creatures there in their world, such as hippogriffs and dragons. It was a textbook for a subject called A Care For Magical Creatures, written by the then famous Magizoologist (boy, we wished this was a real thing), Newt Scamander. The Fantastic Beast pentalogy is actually based on the challenges and adventures of Newt Scamander before he became the most well-known Magizoologist and author (in their world, of course).

Have You Watched All The New Shows Too?

Apart from the Fantastic Beasts series and Harry Potter series, there are also some other types of spin-offs from the Wizarding World such as the Hogwarts Tournament of Houses show and the Return To Hogwarts film documentary. These are a must for the true-blue Potterheads.

Here are a few of the Wizarding World’s hit shows and movies with their synopsis that have captivated fans globally:

Fantastic Beasts and Where to Find Them (2016)

In the first Fantastic Beasts movie, Newt Scamander (Academy Award® winner Eddie Redmayne) is the wizarding world’s preeminent magizoologist. In 1926, Scamander has just completed a global excursion to find and document an array of magical creatures. Arriving in New York for a brief stopover, he might have come and gone without incident… were it not for a No-Maj (American for Muggle) named Jacob, a misplaced magical case, and the escape of some of Newt’s fantastic beasts, which could spell trouble for both the wizarding and No-Maj worlds.

Fantastic Beasts: The Crimes of Grindelwald (2018)

In the second Fantastic Beasts film, the powerful Dark wizard Gellert Grindelwald (Johnny Depp) is captured by MACUSA (Magical Congress of the United States of America). But, making good on his threat, Grindelwald escapes gathering followers, most unsuspecting of his true agenda: to raise pure-blood wizards up to rule over all non-magical beings. To thwart Grindelwald’s plans, Albus Dumbledore (Jude Law) enlists his former student Newt Scamander (Eddie Redmayne), who agrees to help, unaware of the dangers ahead.

Fans are invited on a magical first-person journey through the beloved film franchise as it reunites Daniel Radcliffe, Rupert Grint, Emma Watson, and other esteemed cast members and filmmakers across all eight Harry Potter films for the first time to celebrate the anniversary of the franchise’s first film, Harry Potter and the Sorcerer’s Stone. This film documentary is actually a reunion of the past cast having nostalgic conversations with each other about their wonderful memories on screen.

Here’s a list of the movies set in the Wizarding World that you should know:

But Where To Watch The Marathon?

Now that you know the background, you can watch the Harry Potter Movie Marathon for all the Harry Potter movies only (number 5 to 12 on the list) on Cartoon Network (Astro Ch 615). It will air from April 8 – 23, daily at 8 pm.

But to have the full Wizarding experience (all of the movies and shows on the list), you can stream, download and enjoy the Harry Potter movies, Fantastic Beasts movies and additional shows on HBO GO.

Don’t miss out on these Potterheads!