However, some YouTubers managed to recreate the stains using a wet cotton bud. 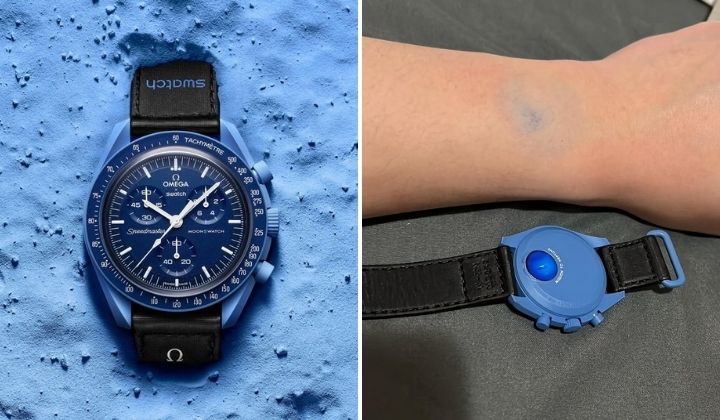 The Omega x Swatch MoonSwatch drew a lot of excitement on 26 March when it was launched despite not being a limited edition item.

However, the long waiting time among the crowd might not be worth it. Not long after the hype for the watch died down, buyers who bought the Mission to Neptune watches started complaining about blue stains on their wrists.

A Facebook user Jeffrey So shared on Facebook that he noticed a blue stain on his wrist caused the back of the watch after a hot and humid party.

He also complained that the watch already had scratches all over it when he first unboxed it and the straps of the watch felt like ‘garbage.’

So also has the Earth range and it stained his wrist as well.

Due to this, So said it cannot be considered a luxury watch but noted that it was a cool collaboration.

Another netizen reported on Reddit that there were similar blue stains on his wrist and wondered whether he bought a fake watch.

However, he did not elaborate more on the matter.

Bloomberg reached out to Swatch and its spokesperson explained in a statement that the dye is harmless, non-toxic and a ‘very, very rare experience.’

The company assured customers that the discolouration will vanish over time. The stain is due to the “high amount of pigments used to achieve a strong colour result.”

They also said the colour of the item will remain unchanged.

The company added that the staining incident has been reported to the quality management of its production facilities and has already taken all necessary measures on the matter.

Netizens joked that the collection should be renamed the Omega x Swatch Stainmaster to live up to its reputation.

Although Swatch said it was a rare occurrence, a few YouTubers managed to recreate the staining just by rubbing a wet cotton bud on the surface of the watch a few times.

Another netizen joked that staining means the watch is a new watch. If the watch doesn’t give off stains anymore, it means it’s an old watch.

Since it’s not a limited edition watch, some people were planning to buy themselves the MoonSwatch another time.

Now knowing that the watch stains easily, some netizens thanked people like So for helping them save their money.

Scalpers Are Reselling MoonSwatch At A Higher Price, Netizens Make Fake Listings To Warn Others