From Teluk Belanga necklines to Songket or Batik fabric, these traditional attires are gonna waw you away! 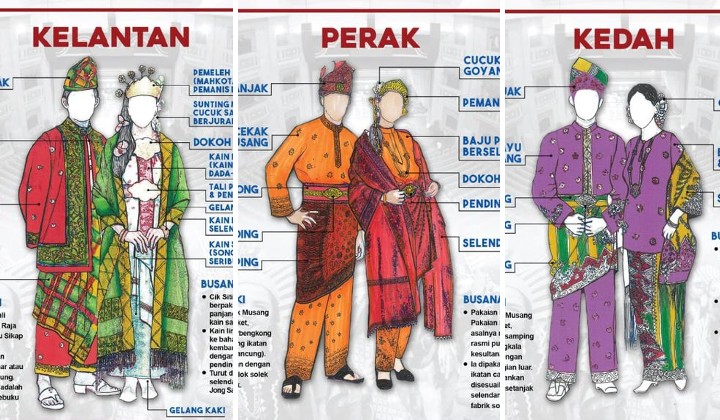 There are many types of Baju Kurung, Baju Kebaya and Baju Melayu from the Malay culture.

But ever wondered what Malay and several other traditional clothes according to the states are like?

Thanks to the art design department of Istana Budaya, we can have a glimpse of what they would look like.

But do note that these are only creative fashion designs from the department. This means that all of the details are created and inspired to fit the fashion sense of what people in those days and states would wear.

But still, these designs are very detailed and super interesting.

Let’s check them out!

For Perlis, the fashion for women there would be the Kebaya Perlis (it’s longer than a common kebaya) with a long selendang (shawl) wrapped around the shoulders. It’s usually accompanied by a dokoh (kerongsang brooch) at the front of the Kebaya.

For men, Baju Melayu Cekak Musang (collared top with multiple buttons along the top chest) is very popular around the northern and middle parts of Malaysia. Here, the top, hugged by a samping (outer fabric around the waist) and tanjak (headdress) is made with the same fabric. Usually, there’s a Baju Sikap (outer jacket) for the top and bengkong (belt) with pending (buckle) to secure the samping to the body.

Next, Kedah is known for the traditional Baju Kurung Kedah for women where the top is shorter than the normal Baju Kurung. This particular fashion is paired off with a songket sarong (skirt) and selendang around the shoulders.

For the men, Baju Melayu Cekak Musang is worn with five buttons, which actually has a specific meaning in traditional history!

For the Penangites, women are donned with a Kebaya Nyonya (Chinese Peranakan) or Chetti (Indian Peranakan) in which the tops are shorter and decorated with embroidered laces while the sarong used Batik cloth.

In this creation, the Penangite men would wear a top similar to a western bush jacket that’s matched with a checkered-motif samping. The look is completed with a Tarbus, a Turkey inspired headdress that’s quite well known among traditional Malay Penangite men (also a must headdress for their Boria performance).

Perakian women are donned with a look called Puteri Perak (Perakian Princess) where instead of a sarong skirt, the women wore pants with the same fabric as the top. The look is also completed with a samping tied in a Perakian style called Ikat Pancung.

Men would wear the same Baju Melayu Cekak Musang with five buttons. But the only difference would be their samping, tied with the Ikat Pancung style. Who knew there’d be so many different ways to tie a samping.

If you don’t know Cik Siti Wan Kembang, she was the badass solo queen of Kelantan once upon a time.

READ MORE: Did You Know Malaysia Has A Lot of Fairytale Princesses And Legends As Well? [Part 2]

The female outfit for Kelantan is based on her royalty fashion where she wore three pieces of clothing (the sarong, the body wrap and the selendang). The nobilities wore Kain Limar, a type of cloth similar to Songket but with different patterns. Also, in those days, women wore a cloth to wrap their body up to their chest only and covered their exposed shoulders with a long scarf (usually called Kain Kelumbung).

For the men, their fashion was completed with Cekak Musang Baju Melayu and Baju Sikap, which was styled in a royalty (songket fabric) way called Baju Putera Raja (the prince’s suit). Kain Limar or also Songket can be used as a fabric for samping in this look.

For Terengganu, the women were dressed in a Baju Kurung Pesak (Pesak means an additional cloth sewn to the sides of the body for flexibility) with a long selendang. The fabric for the whole costume is made from Songket, a particular cloth that came from Terengganu.

For men, they wore a Songket Baju Melayu with a Teluk Belanga neck style. Of course, they use Songket material for their samping as well, just with a different pattern.

For Pahang, the women wore Baju Kurung Riau Pahang that has Pesak and Kekek Gantung (type of stiches) at the sides. Apart from having a Cekak Musang kinda neckline, this type of Baju Kurung is made with a small waist design, suitable for those with an hourglass figure but still want a modest look.

The only difference from the men’s clothing is their samping (tied in a Pahang way) and their way of wearing Tanjak.

Selangor women’s traditional wardrobe is simple yet very classy. They wore the Baju Kebaya Labuh Selangor or The Malay Dress where it’s like a normal kebaya, but longer.

The only difference from the men was again, their way of wearing tanjak. Yes, even the headdress has different styles!

Honestly, the Wilayah Persekutuan’s fashion is very similar to Selangor’s, just with minor details as differences. The female has a more modern touch to the Kebaya while a different Tanjak style is used for the male.

For the Melaka look, women wore a Baju Kurung Teluk Belanga neckline with a songket/batik/silk sarong that’s tied with a flowy pattern at the sides called ‘Ombak Mengalun‘. Their look was completed with a distinctively unique headdress and chest cover called La. Imagine wearing that headdress to the office.

The men wore the same Baju Melayu with a Baju Sikap on top. The only difference is perhaps their headdress and samping style.

In Negeri Sembilan, the womens’ wardrobe design is as quite similar to Malacca. The only differences are the main sarong’s pattern (this one has Sumatran origins) and the velvety Baju Kurung fabric.

The men wore the same kind of velvety fabric for their shirts and the style of their tanjak is also slightly different from the other states. Both the men’s and women’s clothes have gold coloured weavings to label them as Minangkabau nobilities.

Fun fact: The Teluk Belanga neckline look is especially popular in Johor. The women wore it in a Baju Kurung with an Ombak Mengalun sarong. The look is accompanied by a sibai / kain mantul (small cloth covering shoulder and chest) and a Kain Kelubung which was donned like a samping, in a Kain Dagang Luar (the samping was tied outside the top) look.

The men wore the Teluk Belanga Baju Melayu with the samping tucked inside the top instead of outside. The look is accompanied by their famous tall Songkok (headdress).

This particular traditional wardrobe in Sabah is of Kadazan Papar descent. The female would wear a top called Sia and a skirt called Gonob. The look is completed with a headdress called Siung.

For Sarawak, this particular traditional attire is based on the Iban people. Females would wear a top that’s strapped with a sash called Selampai and a skirt called Kain Karap with a distinct motif. The look is completed with accessories such as Tango (chest cover), Rawai (silver corset), Sugu Tinggi (headdress) and more.

The men wore an attire called the Baju Burung donned with a Baju Gagong on top of it. The bottom is called Sirat and the look is completed with a very unique feathery headdress called Ketapu.

So these are some of the inspired traditional looks for Malaysians in each state, long ago. Some are also still worn today, but with a modern twist.

Now that you’ve seen some of them, why not style these out for your next Raya Aidilfitri OOTD?