Sayf got the idea when he saw a Mickey Mouse mascot standing outside a McDonald’s branch while asking for donations to help the needy. 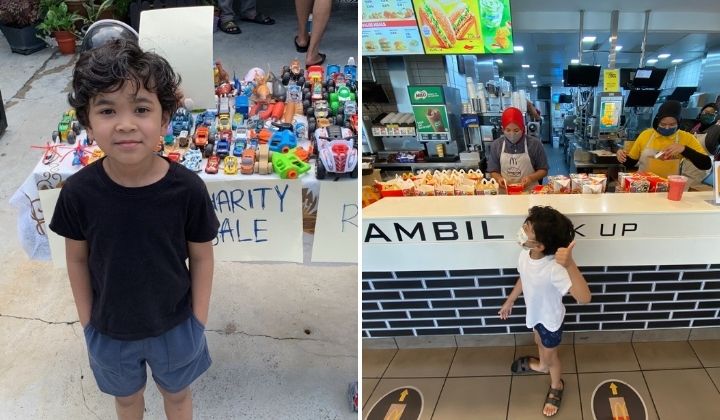 It first started when Sayf saw a Mickey Mouse mascot standing outside a McDonald’s outlet while asking for donations. Sayf was inspired to treat orphaned children to a good meal and decided to sell his toys to raise funds.

To do so, he set up a table and lined up all of his toys such as Hot Wheels and monster trucks for sale in his house in Ampang. He charged around RM2 to RM5 per toy to achieve his goal.

The proceeds of the sale managed to treat 35 orphaned children to McDonald’s Happy Meals.

According to Sayf’s mother, he was initially shy to pass out the food but he gradually became excited because he managed to cheer up others with his initiative.

Netizens were full of praise for Sayf for his ‘ultra’ kind heart and his parents for bringing up such a thoughtful boy.

The netizens thanked Sayf for helping out those who were less fortunate than him too.

Someone also joked that Sayf could list 17 years of experience in volunteerism in his resume by the time he’s 23-years-old at this rate.

Sayf showed everyone that kind deeds aren’t limited to age and anyone can help someone in need.

Hopefully, Sayf will be able to help more people as he grows older. Good job, Sayf!

Awh sweetheart, what a way! Born & bred good, may the force always be with you angel. Terima kasih for your kind act Sayf, terima kasih to those who were there altogether to make it happen, too ♥️

Even at age of 6, his level of sharing is caring is just ultra!!! Kalah orang dewasa wei! May his love & kindness spread like wildfire. 👍👍

His resume at the age of 23..
“17 years experience in volunteerism”

If you’re looking for more feel-good stories, check out this adorable story about a boy helping his schoolmate carry a heavy school bag.

14YO Girl Kidnaps Baby In Penang Because It Was “Too Cute”