A new yogurt chain popped up over the weekend looking eerily similar to Llaollao. 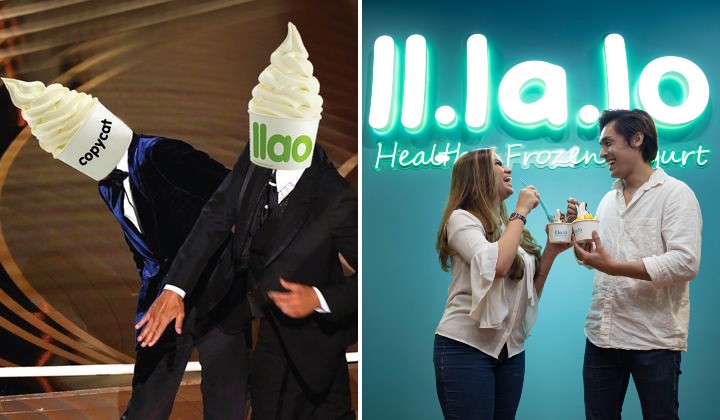 Popular frozen yoghurt (froyo) chain Llaollao Malaysia recently posted a meme of Will Smith slapping Chris Rock at the Oscars in an attempt to joke about copycat froyo chains.

Essentially, it appears that Llaollao is upset about the rise of froyo chains offering similar products: frozen yogurt with toppings.

Most people assumed that this was done in response to a new froyo store that opened in Ampang Point, featuring a very similar brand name with an almost identical business.

The name, logo, and font choice of ll.la.lo is extremely similar, while their offerings include vanilla ice-cream-flavoured frozen yoghurt eaten with plastic spoons strongly resembling Llaollao’s with an elongated teardrop shape, plus toppings such as fruit, crumbled biscuits, and sauces.

Supporters are critisizing the ‘copycat’

Some netizens made fun of the new store, saying that if they want to copy the business they could have at least tried a little harder to make it look different.

‘Competition is a part of business’

Some customers even cheekily suggested that if there’s more competition, Llaollao might have to not be so stingy with their toppings and give customers a little bit more to keep them returning.

Some say Llaollao isn’t innocent either

Of course, Llaollao wasn’t the first brand in the Malaysian market either. Some people reminded Llaollao that Tutti Frutti was the first to introduce the concept of froyo with toppings in Malaysia, and that Llaollao only came later.

Others even brought up the ironically similar ‘copycat’ issue concerning the franchise of Taiwan-based Chatime which was embroiled in controversy after the Malaysian franchise stores were all turned into the new brand Tealive.

People may remember the company involved, Loob Holding Sdn Bhd, which lost the franchise license for Chatime. However, Loob Holding then launched the new brand Tealive and turned all their existing Chatime outlets into Tealive outlets, selling an almost-identical menu of bubble tea with toppings.

However, Tan Kai Young has since been identified as the CEO of Woodpeckers Group, which is also the master franchiser of Llaollao in Malaysia.

While Woodpeckers Group does not appear to have any business relation to Loob Holding Sdn Bhd, its headquarters is also located on the same street in Kota Damansara.

Regardless, having new froyo chains simply mean more choices for the consumers, especially those who are big fans for frozen yoghurt!