The bad weather went away soon after the ritual and the race started about an hour behind schedule. 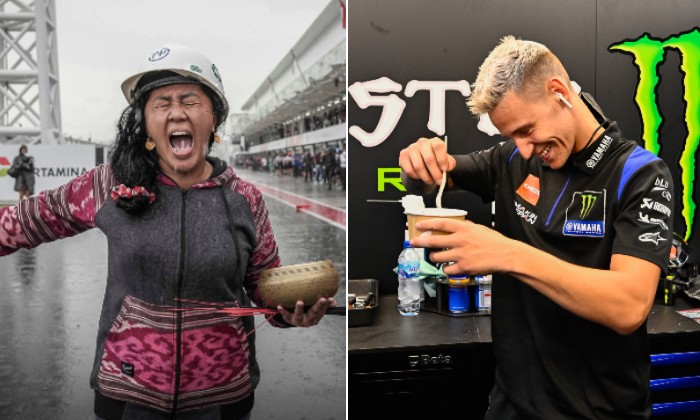 Things were wet, wild and a lil’ other-worldly over the weekend when organisers of the 2022 MotoGP Indonesian Grand Prix that took place at the Mandalika International Street Circuit in Lombok enlisted the aid of a “Pawang Hujan” or rain shaman to wish away torrential storms which were delaying the race.

Luckily the weather conditions cooled off and allowed us to race! ⚡️#IndonesianGP 🇮🇩 pic.twitter.com/jwI3fEHjBq

Armed with what appears to be a brass bowl, some incense sticks and other unique items, racing fans from across the world got a chance to witness first-hand how master Rara Isti Wulan went around the track to conduct a ritual in hopes of putting a stop to the downpour.

Master Rara’s work also attracted the attention of French rider Fabio Quartararo who playfully became an “apprentice” of the Southeast Asian school of witchcraft and wizardry.

And the ritual seemed to have worked too!

Despite the wet circuit, the rain apparently ceased just an hour later than the scheduled race, and the MotoGP continued as planned.

But weirdly enough, the rain-away ritual did draw criticism from some people here in Malaysia who claim that what took place was embarrassing and religiously wrong.

Read More: Raja Bomoh Teams Up To Protect Perak From Flood, Authorities Advise People To Stay Away From ‘Rituals’

However, the work that Rara and her new apprentice did, of course, did not go unappreciated.