Netizens didn’t believe that the driver was trying to avoid a stray dog on the road. 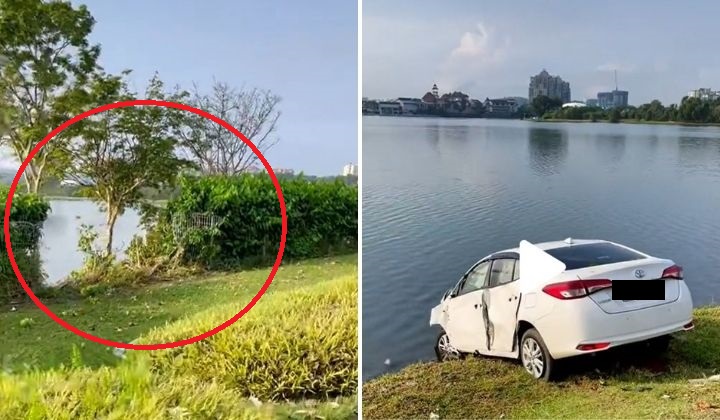 A viral TikTok video recently roused the curiosity of netizens simply because the ‘accident’ path looked strange and slightly comical.

The video traced the number of obstacles such as trees, hedges and also fences mowed down by what seems to be a huge vehicle before ending up with a view of a dented white car close to a lake.

According to Harian Metro, a driver rented the car via Socar and tried to avoid hitting a stray dog that tried to cross the road along Jalan Persiaran Tasik Cyberjaya around 5am on 17 March.

The driver then lost control of the car and almost drove right into Tasik Putrajaya.

The driver did not suffer any injuries and had notified Socar about the accident. The car was towed to the Sepang district police station and the driver was told to lodge a police report.

At first glance, many netizens thought it was an accident caused by a Perodua Myvi due to the vehicle’s notorious reputation for getting into crazy situations and feats. They were glad that no Myvis were involved this time around.

Netizens were also glad that they were no joggers nearby. If not, the number of casualties might be higher.

However, not everyone was convinced that the driver tried to avoid a dog.

A netizen claimed that there were no stray dogs in the area while another netizen said the driver must have driven at high speeds.

This was because if the driver drove slower, they could have avoided knocking down so many things all the way to the bottom of the road where the lake is.

Despite the report, it still remains a curious case for some netizens and they’re not buying the driver’s story.

That said, it’s still a good reminder to drive carefully at a safe speed.