The pillion rider kept tapping their Touch n Go card and waited for the boom gate to be lifted. 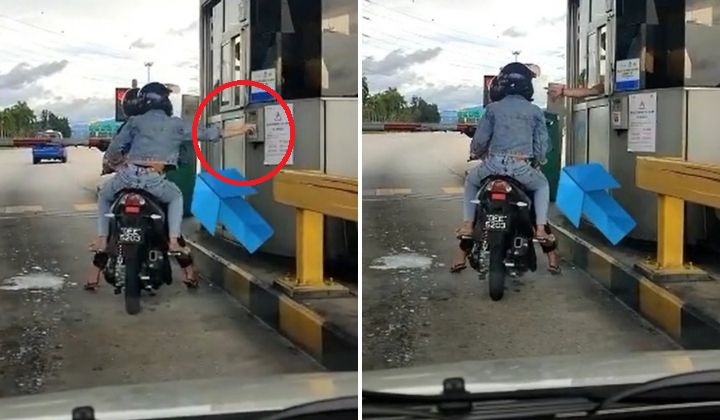 The fact is, nobody likes or wants to pay for the toll on highways. As it stands, there have been cases where the public witnessed a vehicle tailgating another vehicle in front in order to avoid paying the fare.

However, a motorist’s recent actions at the tollbooth made many Malaysians laugh and the viral scene was captured by a dashcam.

A motorist and a pillion rider slowly approached the toll booth after the blue car in front drove away.

At first glance, no one could be faulted to assume the motorcyclist probably wanted to ask the toll booth operator a question but they actually tried to tap their Touch n Go card to pay.

They kept tapping the card and waited for the boom gate to lift up. After a few minutes, the toll booth operator could be seen opening the window and gesturing at them to use the small gap beside the gate to get through.

For those who are unaware, motorcyclists don’t need to pay the toll because it’s free for them.

Despite laughing at them both, netizens pointed out that the motorcyclist and the pillion rider was good-hearted enough to be willing to pay for the toll.

A netizen jokingly implied that they wanted to befriend the motorist to avoid paying the toll too.

Netizens added that both of them probably never had a car before so it was their first time encountering a toll booth on the highway.

The motorcyclist and the pillion rider probably just wanted to do obey the law and do the right thing.

Some people wondered why the motorcyclist used the road meant for cars.

Other motorcyclists shared that sometimes they used the road meant for cars because travelling on motorcycle lanes could be dangerous.