However, some said the man wouldn’t need to fish out debris in the murky water if the people in the city didn’t litter. 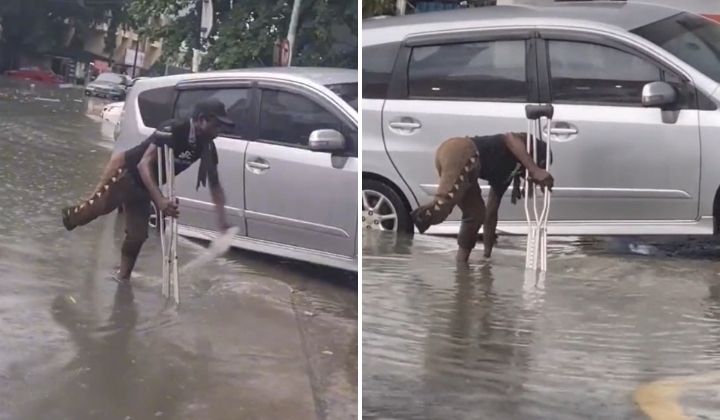 The torrential rain has once again flooded several parts of the city and made some roads impassable such as Jalan Kuchai Lama, Jalan Pudu, Jalan Tun Razak, and Jalan Pahang.

The floodwaters also entered some commercial buildings such as Wisma UOA Bangsar and Impiana Hotel with waters falling from the elevators.

Amidst all the chaos, everyday heroes have stepped up to do their part to help. Ordinary citizens went the extra mile to wade through the rising waters to dislodge litter and debris blocking the manholes on the road.

One of these heroes was captured on video limping his way to the blocked manhole on crutches. The video went viral with 51.4k likes on TikTok and 2k likes on Facebook.

The man then reached into the murky water beside a parked car and began pulling out debris such as a flattened cardboard box and tossing them to the side.

The moment he removed the litter, the stagnant water quickly emptied into the manhole. He was soon assisted by another man who came with a plastic container to hold all the debris.

In the viral video, netizens could also spot the amount of litter they fished out of the water and honestly, it was a lot.

Positive vibes all around

Netizens praised the man’s selflessness and thanked him for being exemplary to all Malaysians.

Others criticised the people who publicly littered. They said if the people in the city did not litter, the man didn’t have to struggle and pick up the rubbish on everyone’s behalf.

Some said it’s probably time for Alam Flora and DBKL to review all the cleaning contracts and open the tender to others again.

However, the viral video still brought some positivity to the world because another netizen offered to equip the man with a prosthetic leg and asked the others for help to put him in contact with the man.

A few of them offered to chip in to help cover the cost too.

Another netizen had come across the man in the video near the Caltex Pudu area while another person said the man is also skilled in repairing cars and motorcycles.