Squids are attracted to bright blue and green light. 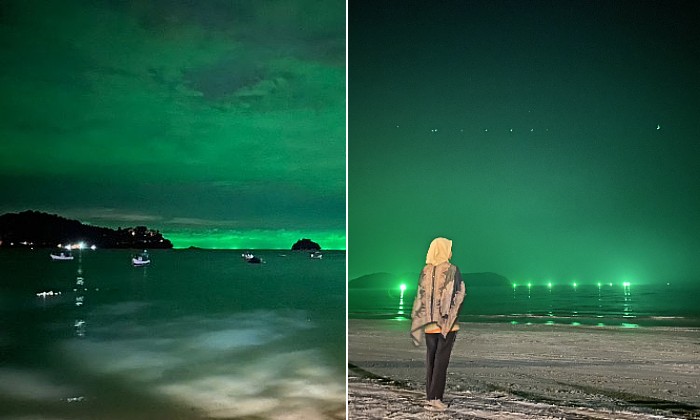 Netizens marvelled at how the heavens had glowed an enchanting emerald green when Twitter user zareen shared surreal snapshots of the nights’ sky she took off the coast of Pulau Pangkor in Perak.

The sky turned out to be so beautiful but we are unsure of its source.

It looks like the northern lights to us but that is kinda impossible. @metmalaysia can you confirm this? Or anyone? pic.twitter.com/822YmbKtBE

Wondering what on Earth was going on, zareen along with many others on the internet questioned whether the viridescent scene was something natural or entirely out of this world.

Thats a Flying Dutchman sailing on the edge of the sea.

Portal into the Matrix

Many had attributed the phenomenon to the aurora borealis or more commonly known as the Northern or Southern lights that occur when the sun’s particles hit our planet’s upper atmosphere and create spectacular flashes of light in the sky in some parts of the world.

Awesome! Kalau betul aurora it would be call Aurora Malaysialis 😆

But, as it turns out, the celestial sight is actually created by people catching calamari.

Squid jigging or “candat sotong” as we locals call it, is normally carried out at night.

For centuries, fishermen have been using bright lights in order to illuminate the water and attract squids from the sea depts up to the surface.

Back in the old days, people used to do this with simple nets and fishing rods or on small boats with flame-lit torches and oil lamps.

But nowadays, bigger vessels and bright LED lights have taken over the trade, and along the way, anglers discovered that squids are especially lured in by blue and green coloured light.

In Malaysia, squid season comes along around the months of April and August, and every season, fishermen and tourists would venture out to sea in the search for these elusive invertebrates swimming in our oceans.

zareen’s curiosity inspired other Malaysians to share their own magical snapshots of greenlit skies over the country’s coastlines.