KFC added a handwritten note to explain the food swap and said the customer could choose mashed potato or nugget. 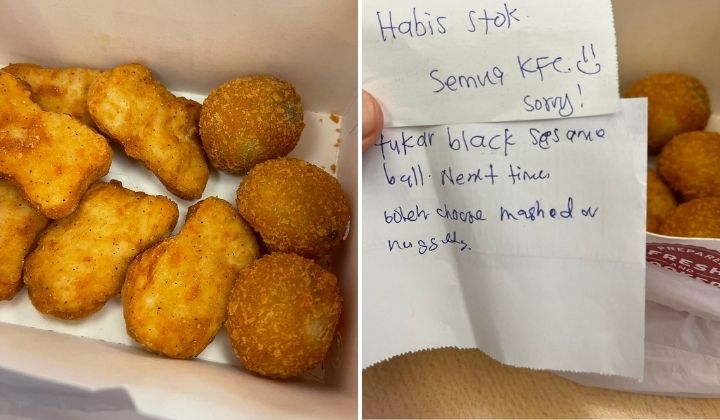 The potato shortage in the world is increasingly felt by customers in Malaysia when they order their favourite meals in fast-food restaurants.

A netizen recently complained about a Kentucky Fried Chicken (KFC) chain in Kuala Lumpur for continuing to sell food items that were not available or out of stock due to the potato shortage.

The customer is believed to have ordered nuggets with some potato wedges from the Foodpanda app.

Since there were no potato wedges available, KFC replaced it with some sesame balls accompanied with a handwritten note to explain the food swap.

Potato and wedges finish stock. All KFC. Sorry. Changed to Black Sesame Ball. Next time you can choose mashed potatoes or nuggets.

The note from KFC.

The disappointed customer added that they were given bread the other day when they ordered chicken.

The customer said that if there is no stock, KFC shouldn’t have listed the food selection in the app.

They tried reporting in the app but received no reply and pointed out how the other KFC branches do not list food items that are not available.

They also asked whether it’s difficult to give extra chicken nuggets instead of sesame balls.

Netizens sympathised with the netizen who had a disappointing experience with their food orders and agreed that KFC shouldn’t list the food if it’s unavailable.

Another person said customers might as well just boycott the food chains because there’s no chicken either while someone else suggested that KFC should do something since the potato shortages has been months in the making.

A few netizens expressed a little disgust at the thought of dipping the sesame balls in ketchup and mayonaise.

One of them also shared a similar experience when they wanted to order chicken. Only chicken wings were left in the morning and by 12pm, they can’t choose the chicken parts anymore.

Let’s hope KFC will be able to sort out its listing in the food delivery app soon to prevent other customers from being disappointed with their food orders.