The puppy darted left and right to avoid getting grabbed to safety by the firefighter. 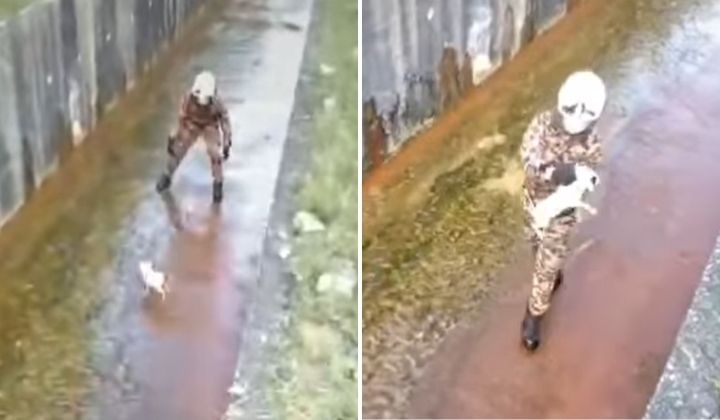 What was supposed to be a simple animal rescue became a workout and a funny moment for a few firefighters in Cyberjaya.

Firefighter and Youtuber Izzat Izwan posted a funny yet heartwarming clip on his Facebook of an encounter with a lost puppy on 1 March.

The adorable video went viral with 14k likes and 454k views. It was also shared on his TikTok account.

On that day, a tiny puppy was stuck in a huge ditch so Izzat and his colleagues were sent to rescue the cute animal.

However, the puppy ran away whenever they tried to get it out from the deep drain. His colleague, Fauzi, kept shouting instructions at both the dog and his colleague who was guarding the other end of the ditch.

Fortunately, the firefighter managed to grab hold of the puppy when it darted to the side. They tried to calm down the puppy once it was safe in their grasp.

We are trying to save you but you… aduhai. It’s ok, it doesn’t understand.

Firefighter Fauzi could be heard saying to the puppy.

Netizens were tickled by the puppy’s actions and the lengths the firefighters went through to save the stray animal.

They think it’s a very cute yet naughty puppy and thanked the firefighters for rescuing it from the ditch.

However, a netizen noted that the puppy in the video looked like a puppy she previously saved from a ditch too.

If both the firefighters and the netizen rescued the puppy from the same area, it could have been the same puppy that somehow loves being in the ditch!