The makeshift flood barrier managed to hold its own against the strong water current. 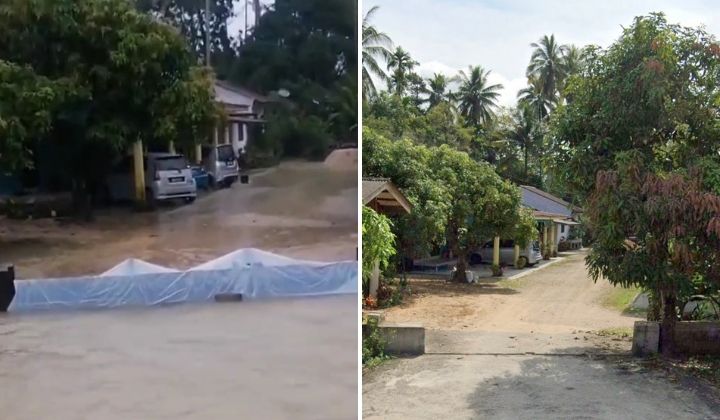 Major floods on the East Coast have homes underwater, and residents had to be evacuated to safety.

However, a smart solution helped keep a home in Kelantan dry as a bone.

In a viral video shared on Twitter, someone living in Kampung Bukit Abal in Pasir Putih managed to make their own flood barrier and it succeeded in keeping the floodwaters out from the vicinity of their home.

The DIY flood barrier managed to hold its own against the strong water currents and diverted the water away.

Based on observations, the barrier seemed to be built using sandbags that were stacked tall where the house gate was.

The sandbags were then covered using a plastic sheet. Wooden stakes were placed behind the line of sandbags as support columns.

Finally, the sandbags with the plastic sheet covering were held down by heavy rocks.

At the time of writing, the video has 17.3k likes and over 9k retweets.

A netizen who passed by the house confirmed that the video was real and the house was dry.

Netizens were amazed by the creative problem solving and thought that whoever made this studied civil engineering.

They applauded the person who came up with the solution so they didn’t need to rely on others for help each time it floods.

Some netizens said that the solution works because their families have done something similar too.

Since the simple low-tech solution works, perhaps others could try building their own flood barriers when the floods return.