Harith Iskandar told Khairul Dzaimee Daud that his jokes were simply comedy and not to be taken too seriously. 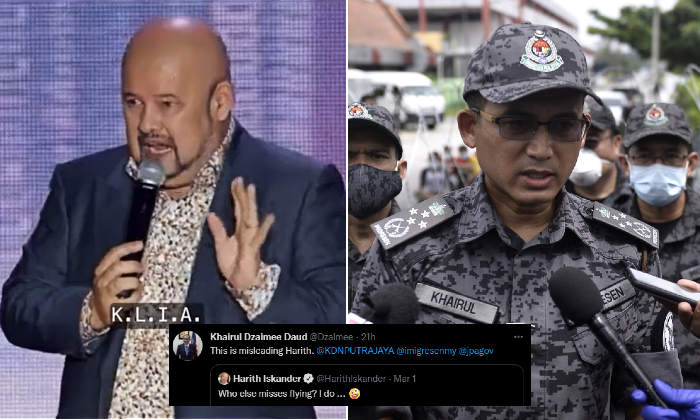 There’s an old saying which goes, “many a truth is oft-told in jest.”

So it’s really no surprise that some people choose to side with local comedian Harith Iskander when he made jokes that took the Malaysian Immigration Department to task.

Harith recently shared a snippet from his 2018 Netflix stand-up comedy special — I Told You So — where he quipped about the alleged difference between how efficient our neighbour Singapore’s airport services and immigration authorities were compared to ours.

In response to the critique, Harith commented by saying that the clip was simply meant for comedy and not a parliamentary debate.

But Khairul still insisted that the comedian must be fair when presenting information to the public.

I know. But the information matters. Be fair. https://t.co/te4j1dE2a4

Their Twitter conversation invited netizens from both sides of the argument to chip in their thoughts.

Some shared the Immigration DGs opinion that it was wrong for Harith to portray the country in such a bad light.

“I concur. Selective perception. In fact, I experienced worse in other countries,” noted one commenter.

I concur. Selective perception. In fact, I experienced worst in other countries.

“Just to make people laugh, you insult your own country,” wrote another.

“Are you proud of embarrassing your own country?” another user asked.

Some also move to point out that KLIA actually has some of the best services in the world.

“Put joke aside. Over the years, KLIA immigration clearance is one of the fastest and consecutively won Skytrax awards. It is indeed a Passengers Choice of Award for the best service rendered by agencies.” one user said.

Thank you Mr @HarithIskander , put joke aside. Over the years, KLIA Imm Clearance is one of the fastest & consecutively won Skytrax awards. It is indeed a Passengers Choice of Award for the best service rendered by agencies https://t.co/d3Lj7a1G0p

Meanwhile, others feel that the joke had hit its mark in revealing both the Immigration Department’s and KLIA’s weaknesses.

“Agreed. If all of the counters were opened, we’d be shocked and confused,” wrote one user joking along.

“KLIA is far behind other international airports like Dubai, Abu Dhabi, Doha, Istanbul and others. Yet in the local news always praise KLIA as one of the best airports in the world. Syok sendiri?” asked another commenter.

KLIA is far behind other international airport like Dubai, Abu Dhabi, Doha, Istanbul and others. Yet in the local news always praise KLIA as one of the best airport in the world. Syok sendiri?

One commenter countered the Immigration DG by saying “I am sorry but it’s not misleading. Have you travelled without your privileges?”

I am sorry but it’s not misleading. Have you travelled without your privileges?

Some even noted that even KLIA’s automated immigration counters often fail to work as intended.

“It’s true. The auto gate is always out of order. The queues are too long. Even before Covid.”

Others were also of the opinion that the DG shouldn’t be too triggered by remarks made by a comedian.

“Have you never seen a standup comedy show?” noted one user.

Have you never seen a standup comedy show? https://t.co/qocEUUizOv