He drives a Ford Mustang but complains about his bills and taxes. 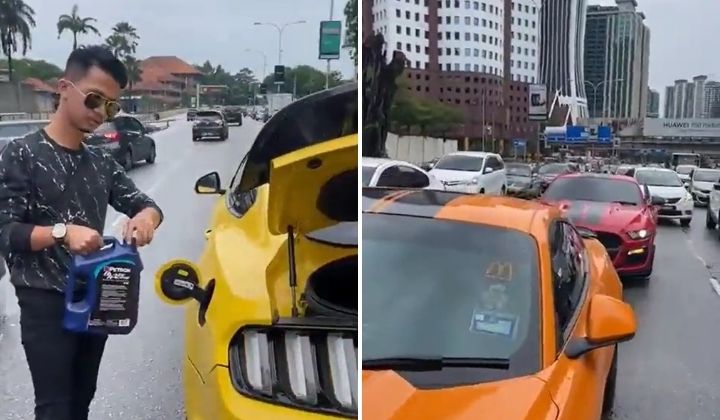 A local influencer was recently called out for causing a minor traffic jam in Kuala Lumpur city centre just for making content.

In the video shared by a netizen, the male influencer could be seen standing next to a yellow Ford Mustang with a bottle of petrol in hand at Jalan Tun Razak.

Behind his car were two other similar looking cars holding up the traffic too. Apparently, he stopped his car in the middle of the busy road because he wanted to fill up petrol.

At the same time, he jokingly complained that he was broke for the month because he had to pay the RM20,000 road tax.

However, netizens could see that the whole ‘stunt’ was done for content only because he did not pour any petrol into the car. He immediately closed the bottle instead.

Netizens criticised him for being selfish and thought that his ‘stunt’ was silly.

They couldn’t believe the audacity of the man and his friend still conversing casually while holding up traffic for nonsense content. Luckily for them, they didn’t cause a road accident while endangering the other road users.

They pointed out that only a poor person would buy an expensive car and whine about expensive road tax.

Since paying the road tax was such an issue for the driver, netizens think maybe he should have bought a more affordable car that was within his means.

A few netizens also tagged the police and the Road Transport Department (JPJ) to take action on the men.

They tagged the Inland Revenue Board (LHDN) to check whether the men paid their taxes too.