Most of the kids seen in the video weren’t wearing their masks or physically distancing themselves. 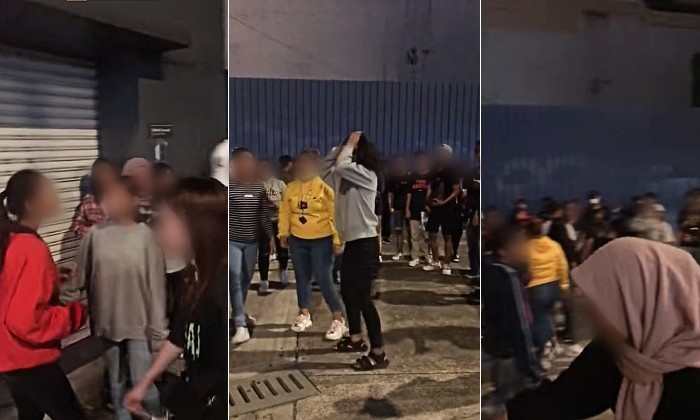 A youthful commotion that took place in the streets of Kuala Lumpur recently has Malaysians a little concerned.

So there’s this video of a fight between a group of young ladies believed to have been captured in Bukit Bintang. At just 24-seconds long the clip titled “Ela Ampang Vs. Ika Puchong” is gaining viral views on a few online platforms.

The footage features what’s best described as a large gathering of teenage boys and girls that were just standing and shouting around at night.

During the commotion, the camera focuses on two girls, similarly dressed in grey, at the centre of the group who appeared to be sizing each other up.

But between the inaudible sounds of teenage angst, and a girl shouting “Who touched me? B*bi!”, we couldn’t really find any more information about what was going on.

What we did find was that netizens thought that the video was both amusing and concerning.

A number of commenters simply laughed at the scene of “children” being wild.

“Kids these days have so much energy,” one user wrote.

Others criticised the kids for their reckless behaviour.

“Pity, What are they trying to prove? If I were their parents I’d chain them to a poll and release kerengga (weaver ants) on them,” another commenter noted.

But what’s most concerning by our observation, especially with Covid-19 cases sharply on the rise, is the fact that most of the youths seen in the video were not wearing their face masks or physically distancing themselves.

Let’s just take this video as a lesson for all to always abide by new normal rules, stay Covid-safe and not be too reckless.