Sleep disorders allow people who are asleep to continue to engage in automatic behaviour. 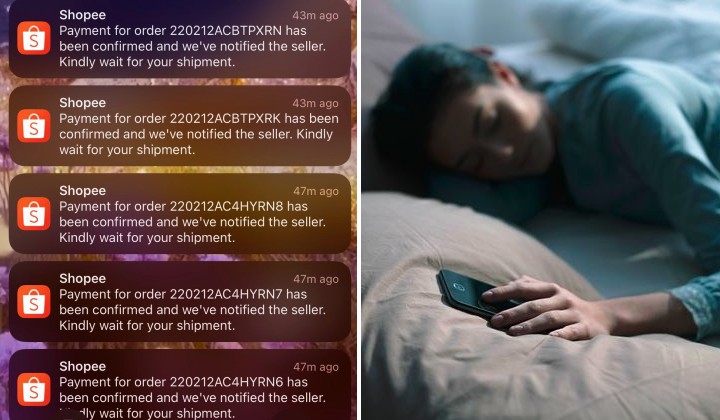 We’ve all heard of sleepwalking (also known by its fancier name somnambulism), but did you know that there are other activities that your body may automatically do while asleep?

These kind of sleeping disorders are called parasomnia, which covers unwanted sleep behaviours such as sleepwalking, sleep driving (dangerous!), sleep talking, and even sleep… shopping?

For Twitter user Seri, who suffers from a parasomnia that allows her to use her phone such as to reply texts while asleep, waking up to text notifications may not be too uncommon.

However, Seri woke up from an afternoon nap with a cartful of payment confirmations from her online shopping account.

okay so sometimes i ada masalah text orang time tidur so tadi petang i tidur kejap and woke up nampak banyak gila noti from shopee??!! Then bukak shopee i was like “SHID DID I JUST SHOP WHEN I WAS ASLEEP??!!!” pic.twitter.com/kHThPxcVfz

For someone with parasomnia, she naturally assumed that she had completed all her purchases while asleep, and was understandably distressed as the whole order costed a good bit of money.

It was not what it seemed

However, it turns out that her parasomnia hasn’t yet extended to online shopping while asleep. Instead, it was actually her boyfriend who has made those purchases through her account because he didn’t know what to buy for Valentine’s Day.

apparently my bf bought it for me 😭☝🏼 dia taktau nak beli apa so he opened my shopee and beli stuff from my cart shdhsjsjks 😭😭💖✨ pic.twitter.com/u5NJLeRC1v

Instead, he cheekily noted that it was an early Valentine’s Day gift to her.

Speaking to TRP, Seri explained that while she and her boyfriend have been together for 3 years, this is the first time they are celebrating Valentine’s Day together.

She also claims that while her boyfriend isn’t a fan of Valentine’s Day celebrations, he does it for her because he knows she loves the special day.

Why is this the sweetest thing. Now i want to try it too hopefully tak kantoi 🤣🤣

Others shared that they only used their shopping cart as reference and usually do not mean to actually make those purchases.

Supposedly, the moral of the story is simply to know your partner’s habits and whether or not they would enjoy the surprise! After all, you should know them best.