One of the officers shook the toy rattle rigorously just to get the child’ attention. Did it work? 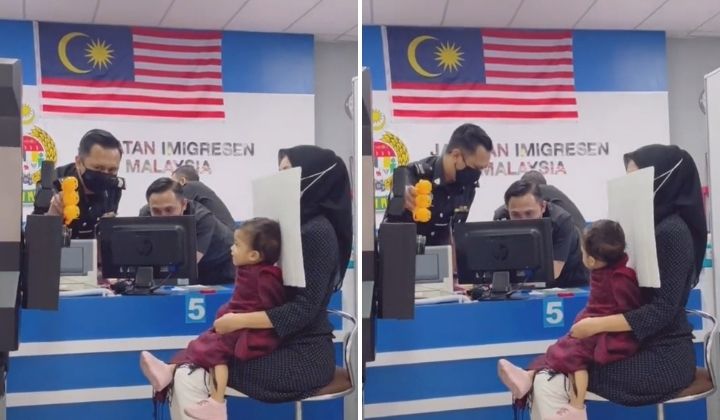 Taking family photos with young children can be a challenge. Some kids can’t sit still and will throw a tantrum, or they’ll be too distracted with everything around them to look right at the camera.

The same goes when it’s time to take a passport picture. Fortunately, the officers at the Malaysian immigration department have several cute ways in their arsenal to get any kid’s attention.

A video posted on Tiktok by @nanad_sj showed the tactics used by the officers when they have to take passport photos of children.

A young child could be seen sitting on his mother’s lap while two officers behind the desk worked together to get the best portrait shot of the child.

While the child’s mother held up a white cardboard to block herself from view, one of the officers shook a toy rattle rigorously near the camera in hopes to get the child’s attention.

It seemed to work because the child looked forward at the camera for a while. The officer jingled the same toy with enthusiasm to get the child’s attention when they needed extra shots.

However, the child was curious to see what the officer was doing behind the computer by this time. The child kept looking back and forth from the toy to the side.

Netizens were tickled by the lengths the officers went just to help the child get the best passport picture taken.

They said maybe the officers could hold the child’s attention span longer if they played some clips of the popular children show, Cocomelon.

Netizens also think the officers love playing with children judging by the way they worked together with the mother and child.

Another parent shared a similar experience in which the officer at UTC Pudu brought out almost everything, including bells.

A few of them said they automatically laughed when the officer started shaking the toy rattle with gusto.

Everyone sure appreciated the officers’ enthusiasm to get the child’s attention and couldn’t stop watching the sweet clip.