Pakdin Roti Canai drives the car around the kampung and uses it for his roti canai business. 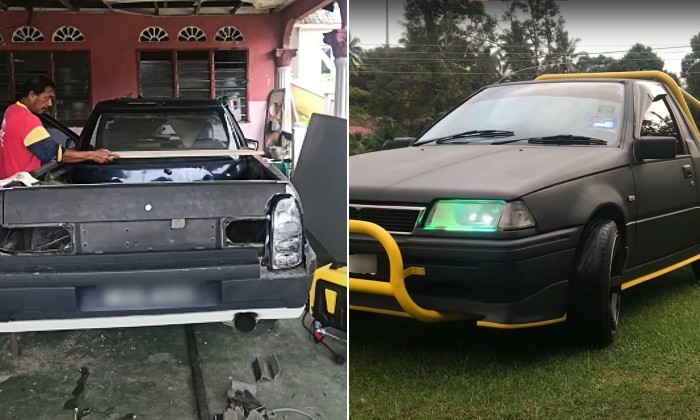 Malaysians were super impressed by this Proton Saga “Knight Rider” pickup truck-thing that a father and son duo from Johor managed to DIY-ed at home.

A 55-year-old man, who locals in Kampung Felda Air Tawar 3, Kota Tinggi call “Pakdin Roti Canai”, took on an interesting project with his son, Hanafi Zaiuddin, to modify their old 1.3cc Proton Iswara and turned it into something more practical and artistic.

With half of its roof chopped off, a cargo bed installed where the backseat and the trunk used to be, strobing LED lights surrounding the front headlights and yellow-painted kangaroo bars that pop out against the car’s matte black paint job –  The vehicle had its own unique appeal.

“Since he has a job working as a tradesman, he carelessly chopped the roof off his car and made it into a pickup,” wrote Hanafi on Twitter, sharing anecdotes of his “Bapak” and their pet project.

Hanafi told TRP that the build took a month’s worth of man-hours to complete with a budget of around RM2,000 for raw materials and accessories.

Hanafi also shared that the car was basically made out of discarded materials. (Points for being eco-friendly!)

The modified machine managed to turn more than a few heads online.

Some even said that the car gave Proton a run for their money. The homemade car did after all look a lot like the Proton Arena – the Malaysian manufactured coupé utility vehicle that came out in the early 2000s.

Proton, people want u to continue build trucks like the Arena… & u didnt, so now they build their own. https://t.co/gu8fh6oEMv

The only downside to this rad remodification is that the car probably wouldn’t pass JPJ (Road Transport Department) inspections or be legal to drive on the roads.

Hanafi explained that the car is only driven around the kampung and that his dad uses it to transport goods for their roti canai business.

But, Hanafi did share his grievances that such car modifications were considered illegal in Malaysia.

If the world of modification is halal in Malaysia, we’d see more creative individuals experimenting for us to value together.

By law, private vehicles can’t be modified without approval from JPJ.

Section 12 of the Road Transport Act 1987, says that modifications made to any vehicles before or after registration must be done so legally and be subjected to inspection by the authorities at any time.

JPJ has set guidelines on certain modifications that are allowed without prior approval.

For a clearer picture of what you can or cannot do to your car, check out this short explainer on AskLegal.

Or, head on over to Hanafi’s YouTube channel to see how he and his Bapak engineered their project from start to finish.