The eldest of the three kids just got home from school and saw the dad leaving. 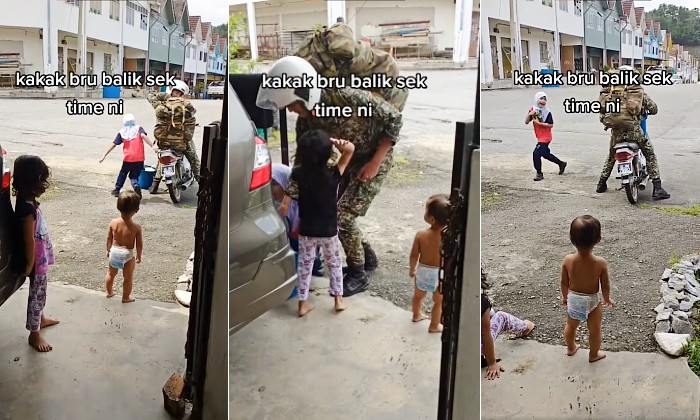 Netizens felt bittersweet when a video of children throwing tantrums as their military dad leaves for duty went viral online.

The 43-second clip, believed to have been captured by a close family member at the front gates of their home, saw three kids trying to stop their father, who was dressed in the signature Malaysian Armed Forces (ATM) uniform, from leaving on his motorcycle.

By the looks of the backpack he had on his back and a bucket full of supplies he was carrying, it’s surmised that the soldier would be going away for a while.

The eldest of the three kids appeared most distraught by her father leaving – crying her heart out and asking the “Ayah” not to go.

Apparently, the “Kakak” just got home from school and saw that her dad was leaving for work.

She even tried to take away and keep her father’s belongings and got one of her younger siblings riled up to stop their dad too.

Meanwhile, the dad was seen trying his best to console his kids.

The video triggered netizens to show empathy towards the family, the kids and the father who was diligently heading for duty as a frontliner.

“She didn’t get the bucket, so she took her dad’s cap. It’s funny, but also sad,” wrote one commenter.

“A father’s service to his family and his country,” said another.

Meanwhile, others prayed for the family’s safety and prosperity.

“May God reward you for your sacrifices,” one commenter noted.