A 2019 PSA claiming that husbands would feel less stress in a marriage if the wife works but earns less income than they do recently resurfaced online. 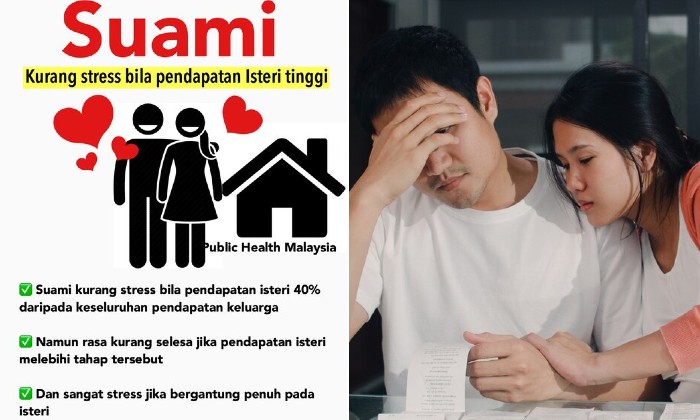 Malaysians were sceptical about scientific research claiming that husbands would feel less stress in a marriage if the wife works but earns less income than they do.

Apparently, the PSA was recently reposted by the Melaka state government (Kerajaan Negeri Melaka) Facebook page before it was later removed, but not before people made screenshots of it.

The PSA triggered netizens to question the validity of the information given. Among them were politicians like Former Women Family and Community Development Deputy Minister Hannah Yeoh Tseow Suan, who argued why it was shared on an official government channel.

This later prompted Public Health Malaysia to respond to Hannah Yeoh, clarifying that they were not an official government agency besides pointing people out to the original source of the research.

What did the PSA say?

According to the PSA, studies showed evidence that husbands tend to experience less stress if their wives were employed and earned 40% or less of the total household income, but feel more stress if they were totally dependent on their wives.

Providing examples for this statement, the PSA explained how the arrangement would work:

The PSA went on to conclude that husbands were “normally” perceived as the family provider and that, maybe, this income issue was why men are less inclined to find partners with higher financial resources.

The PSA was apparently taken from a study available on Sage Journals titled “Spousal Relative Income and Male Psychological Distress”.

The study investigated the relationship between a wife’s relative income and the husband’s psychological distress level.

What they found was that a husband’s psychological distress is minimum at a point where wives make 40% of total household income and increases to maximum when they’re entirely financially dependent on their wives.

These results reflect the stress associated with being the sole breadwinner, and more significantly, with gender norm deviance due to husbands being outearned by their wives.

The research noted that couples don’t experience this problem at the beginning of their marriage, even if the wife earns more than the husband.

The study also concluded that wives don’t feel the same levels of stress regardless of how much their husbands made for a living.

Malaysians however disagreed with the research, with many saying that that sort of patriarchal thinking was outdated in today’s world and should not be taken as a benchmark.

So what are you trying to say? We should lower our capabilities and standard?

It’s 2022, and yet we still have patriarchal mindset. https://t.co/H5XXDrghAF

It screams masculinity inferiority for me https://t.co/1yO7zE3O5V

Other commenters stated that they don’t care if their spouses earned more or less than what they did for a living.

If my future wife makes more than me, im good with that.

As long as she doesn’t use her income as a point against me and she’s okay with what I’m able to provide.

If she wants to live better, she can chip in, of course. I don’t mind. It’s our life anyways. https://t.co/4Xh1nPD9BP

I ever asked my husb what if one day i can earn more than him & he said, “I’m happy & proud of u. Relief too cos knowing if smtg happened to me, u can look after urself & our kids.” So kerajaan melaka, pls stop this mindset. Move forward, not backward. https://t.co/vWt3ps4qmV

My mom earned 3x more than my dad, but I never see my dad making a fuss about that. You guys have fragile masculinity and it shows https://t.co/B65MwTgP2B