The government had set a new retail ceiling price of standard chickens – dropping it by 20 sen, from RM9.10 to RM8.90. 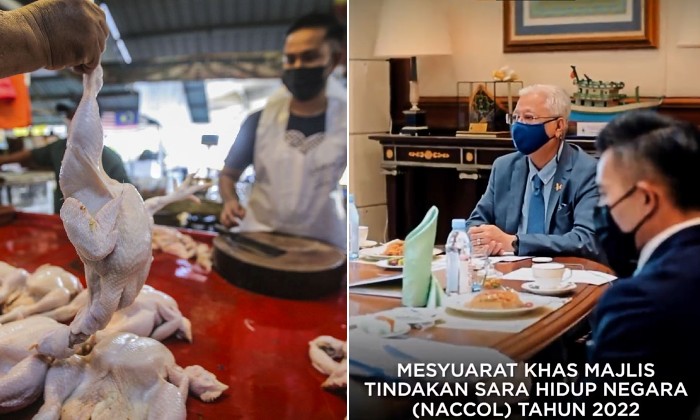 Malaysians had a bone to pick with the government, specifically the Prime Minister’s Office (PMO), about a recent video they released concerning chickens and eggs.

So on Monday (31 January), the PMO announced that the government had set a new retail ceiling price of standard chickens – dropping it by 20 sen, from RM9.10 to RM8.90.

Meanwhile, the price of chicken eggs would stay the same across all grades.

The announcement was made after Prime Minister Datuk Seri Ismail Sabri Yaakob chaired a special meeting with the National Action Council on Cost of Living (NACCOL) as seen in the 26-second clip posted by PMO’s official Twitter account.

Despite the positive news, the announcement video, however, triggered netizens to accuse the government of being excessive and superfluous.

Commenters were generally of the opinion that the video released by the government to accompany the 20 sen price drop was too fancy and unnecessary.

All this fancy video just to tell about RM0.20?😭 https://t.co/CpOHFU7Zwo

You’d think they’d come up with something big given how extra this video is. Sekali apuuu turun 20 sen jak. What a waste of time & resources. https://t.co/rTa7fk0UtW

Many also got mad when they saw that the special meeting chaired by the PM was serving Evian mineral water, among other things, which they deemed to be more expensive than the announced chicken ceiling price drop.

Hard to take this dramatic video seriously when it involves a 20 sen drop in the ceiling price for chicken.

Meanwhile, there is Evian mineral water (RM 8.70 per 500ml bottle – almost the same price of the chicken) on the table. https://t.co/UwIywTu0SK pic.twitter.com/ocQ5OvKMBY

I just love how the folks at the Mesyuarat Khas Majlis Tindakan Sara Hidup Negara were served with Evian water, a bottle of which costs as much as a whole chicken. https://t.co/qW6ehsJeYb

Some also questioned why it took the government and its stakeholders so much effort to come up with the 20 sen price drop.

All these powerful people in the meeting and end up with only 20 cents reduction. You’ve got to be kidding me right? https://t.co/V6cKFC1D8O

How many government servants does it take to fix the price of chicken?

Far too many, clearly.

Evian water, nothing but the best for these losers. https://t.co/dCrpIa1WYH

The price of chickens and eggs have notably been on the rise nationwide.

Read More: [Watch] Perak Politician Pulls His Bird Out During State Assembly To Show How Expensive Chickens Are

The new ceiling price will be in effect this Saturday (5 February) till 5 June under the Keluarga Malaysia Price Control Scheme (SHMKM) – a government subsidy program to ensure that the price of goods remains in control.

The PM was quoted as saying that the NACCOL meeting focused on short-term solutions to release some pressure on the rising price of poultry as well as getting the Malaysian Competition Commission (MyCC) to investigate possible cartels working to determine the price of chickens and eggs.

He explained that long-term plans were to be discussed in detail at the next NACCOL meeting.

The government will provide subsidies to ensure the price of items can be controlled such as SHMKM and details on the subsidies will be carried out by a cost of living task force headed by the Agricultural and Food Industry Ministry (MAFI) as well as several other ministries, representatives of government-linked companies and consumer bodies until prices stabilise.

According to Domestic Trade and Consumer Affairs Minister Datuk Seri Alexander Nanta Linggi, if the government didn’t set the ceiling price for chickens now, the price would exceed RM10 per kg.

The minister mentioned that industry players have been requesting for the government to increase the ceiling price, not bring it down.

He said that this was already the fourth time that the government had reduced the ceiling price of chickens in recent times; from RM9.50 to RM9.30 and the latest one being RM9.10.

The minister also added that the new ceiling price for chickens in East Malaysia will be set separately based on location.