The novelty pet trend was started by a local bird seller to attract customers. 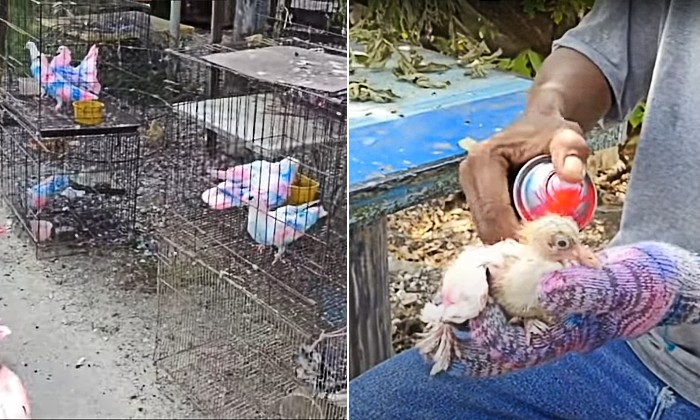 Malaysian animal lovers got upset over the trend of spray-painted “rainbow pigeons” that were bought and sold as pets in Kelantan.

The issue was brought to light by local veterinarian Salehatul Khuzaimah Mohamad Ali on social media, who conveyed her concerns that the methods used to create the novelty pets were a danger to the avian animals.

“Did you know? Any strong scents, in this case, the smell of spray paint is really strong wehhh, it’s dangerous to the birds!” wrote the veterinarian, commenting on news coverage about the trend.

Apparently, an entrepreneur in Kampung Kepulau was said to be selling the birds as a means to make ends meet, and the colourful birds were notably among his bestsellers.

She says that the trend would not have become so popular if there wasn’t a demand from customers wanting such pets.

Salehatul further explains that she merely wants to educate the public and create awareness on the issue, not judge the people who were selling the animals.

Salehatul’s concerns resonated with other animal lovers on the internet who were also bothered by the trend.

Commenters generally expressed their worries over the trend and saw it as a form of animal abuse.

I thought this ‘budaya’ has long died – i cant believe this medieval abuse is still going on. Animals are living things, if you think that they are as alive as you are, then think about whether you’d want to have those toxic paints on you too. https://t.co/Oq33ziyJhK

Others draw parallels to the trend with other colourful pet fads like artificially coloured fish and chicken chicks.

“Believe it or not, this is more common in fish keeping. Some people may have encountered it. These guys, the Parambassis ranga fish, are dipped in colouring. During our youth, it was easily available at fish stores, now it’s more uncommon.” wrote one commenter.

“Back then, these chickens were everywhere at the night market,” another commented.

Meanwhile, others stressed the importance of education and how it’s crucial for everyone to spread awareness on the issue.

This show how education is important in the first place. He might be not able to get proper education due to some reason, however we younger generation especially social media influencer can play some roles in spreading awareness about it. https://t.co/FcuGlFQlCC

The rainbow pigeon trend was crafted by a roadside bird seller in Kelantan as a means to attract customers.

It’s reported that the seller sprays the birds with car paint to make them appear in brighter colours.

The seller had explained that the paint he uses weren’t harming the birds because it only stays on temporarily and that he takes care not to put the animals in any danger – covering the bird’s eyes with tape as he sprays ’em.

Before spraying the paint, I will cover the bird’s eye area to make sure the sprayed paint only sticks to the desired part. The paint used is also not harmful because it is not permanent and only lasts five to six months or until new hair grows.