Azizy loves drawing and colouring, and he finally gets to share his love of art with more people. 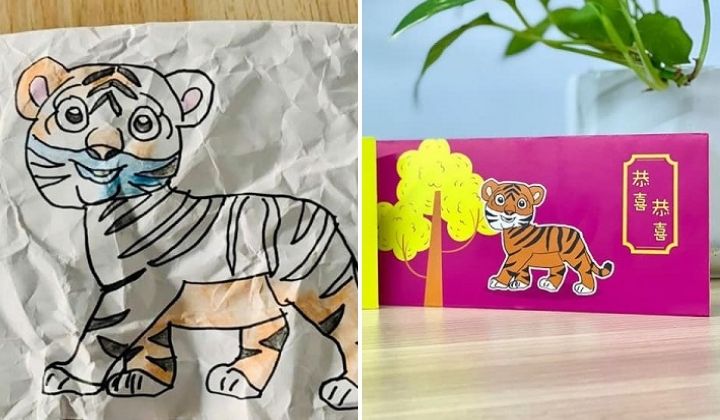 Many children on the autism spectrum possess skills that far surpass their peers.

This is because they are better at processing details than other children and that can be seen when they produce amazing works of art with such detail.

Recently, a 12-year-old boy from Segambut with autism named Azizy had his art skills recognized by Segambut member of Parliament Hannah Yeoh.

Azizy drew an adorable tiger which was featured on Hannah’s 2022 ang pau packet.

Both illustration and the final product entitled ‘The Tiger and The Tree’ were shared on Hannah Yeoh’s Facebook page.

She found out that he enjoys drawing and colouring so she requested a drawing from Azizy to feature on her 2022 ang pau packers.

Azizy and his family happily obliged so he drew a few versions of the Chinese New Year tiger.

The ‘rescued’ tiger that made the cut

Azizy took a few tries before he succeeded. His first tiger looked grumpy and he accidentally coloured the second tiger blue.

Due to the ‘mistake,’ Azizy got frustrated and crumpled up the second drawing.

Fortunately, his team managed to salvage the second drawing which became the drawing featured on the pink and yellow ang paus.

Yeoh thanked Azizy for his effort, flexibility and speed in drawing the tiger for her.

There are meanings behind the drawing too. The trees included in the ang pau illustration is a reminder to all to preserve the tiger’s habitats.

Yeoh added that Azizy’s tiger will be featured in all of the CNY banners in Segambut.

Those who want a few of these adorable ang paus can collect them at United Point from Monday to Friday, 10am to 5pm.

Keep up the good work, Azizy!