Muhammad Hafiq Mohd Asyraf is a natural in front of the (news)camera. 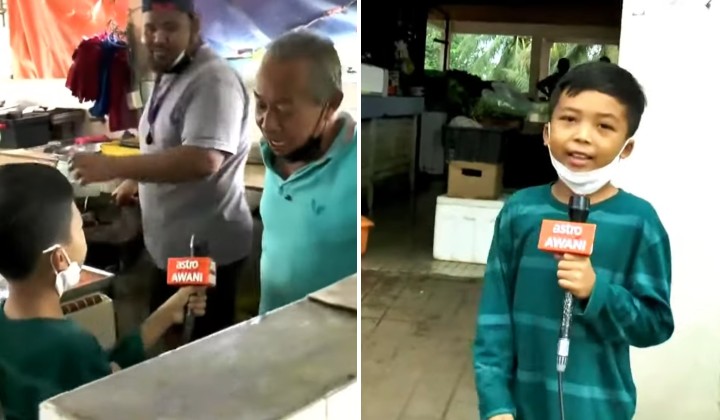 A young child recently went viral for his flawless and surprisingly professional “take over” an interview conducted at his parent’s business.

The 12-year-old boy was being interviewed for a short segment by Astro Awani as a witness to the capture and removal of a python at the Bukit Selambau wet market in Kedah.

Despite being merely an adolescent, he was not shy with the presence of a newscamera.

He answered the Astro Awani news reporter’s questions clearly, saying that he was actually doing his homework at home before receiving a text message from his father about the python in the market.

He rushed over with his mother and called emergency services along the way to have the 30kg snake removed.

The news reporter then handed the mic to him, and the boy proceeded to launch into a well-spoken introduction of his parent’s wet market stall, looking every bit a professional reporter as he guided the news crew around.

He also walked around and interveiwed the rest of the wet market stall owners on behalf of Astro Awani.

Plenty of netizens found his serious performance impressive and entertaining. Many felt that he certainly had a flair for a future profession as a reporter, especially when he joked about “interviewing” the fish and vegetables.

Most people tend to get nervous or shy in front of a camera, but certainly not this kid! Perhaps he truly does have talent for a future in reporting.

You can watch the full segment here: