Netizens were apparently irritated and called out the group for being selfish and ill-mannered. 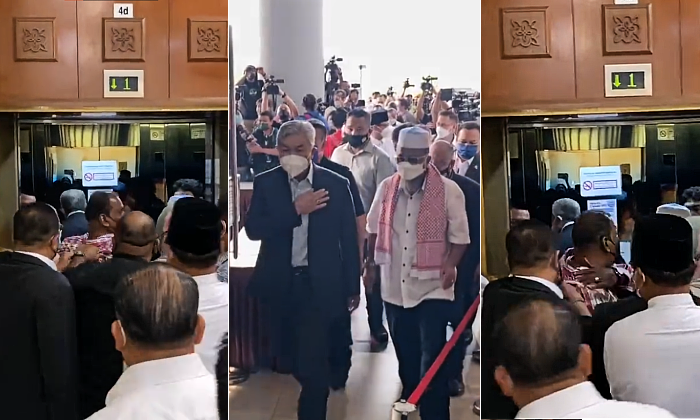 The internet accused UMNO President and Bagan Datuk Member of Parliament (MP) Datuk Seri Ahmad Zahid Hamidi, and his entourage of family members and supporters of being rude to others who were present at the Kuala Lumpur High Court on Monday (24 January) by allegedly cutting in line at an elevator there.

A video shared by CNA journalist Melissa Goh on social media caused quite the stir when the 35-second clip captured Ahmad Zahid’s group arriving at the KL court complex before entering a lift together.

69 year old Umno president Ahmad Zahid Hamidi has arrived at KL court complex flanked by his family members and supporters. He’ll know shortly whether he needs to enter his defence over 47 charges :- 12 CBT, 8 counts of bribery and 27 counts of money laundering. pic.twitter.com/RbiHnwYpJ1

Netizens were apparently irritated and called the group out for being selfish and ill-mannered when they entered the lift ahead of two other people who were supposedly already waiting in line at the scene.

Commenters were quick to point out that one man (the uncle in a checkered shirt) appeared to have been stopped from entering the lift and pulled away by the shoulders to make way for the group as he tried to enter the same elevator.

The guy who politely greeted Zahid gets yanked by the collar for his trouble and prevented from entering the lift. This is what you get for kissing up to politicians.

What a shame. Zahid team showed to the world (at least to those who watch @ChannelNewsAsia ) how the commoner in red checked shirt was poorly treated. Who said Zahid was mistreated? This video shows the opposite le.

The video attracted criticism and conversations of “the commoners VS. the elites” began taking over the timeline.

He showed the difference between Kayangan and mere mortals.

Meanwhile, others voiced their opinions that the behaviour portrayed by so-called VIPs shouldn’t be accepted by members of the public.

The audacity of @DrZahidHamidi bodyguard or whoever that man is, to push the guy that way, out of the lift. This is not something rare among the VIPs and their fellow crews but WE SHOULD NOT NORMALISE THIS. https://t.co/XnGSQdswOO

Others noticed that the group may have violated some pandemic SOPs by crowding into one elevator in such a manner.

What happened to the SOP???
– no social distancing?
– isnt it suppose to be 5 person in a lift at a time?
DOUBLE STANDARD KE

Some also saw the irony of the situation.

How iconic this is. Injustice happened in the place that is supposed to be AGAINST injustice. https://t.co/njx56QXzdV

On Monday, Ahmad Zahid, who’s also the former Deputy Prime Minister, was ordered by the High Court to enter his defence against 47 criminal charges involving corruption (8 charges), breaches of trust (12 charges) and money laundering (27 charges) for a trial that began in 2019.