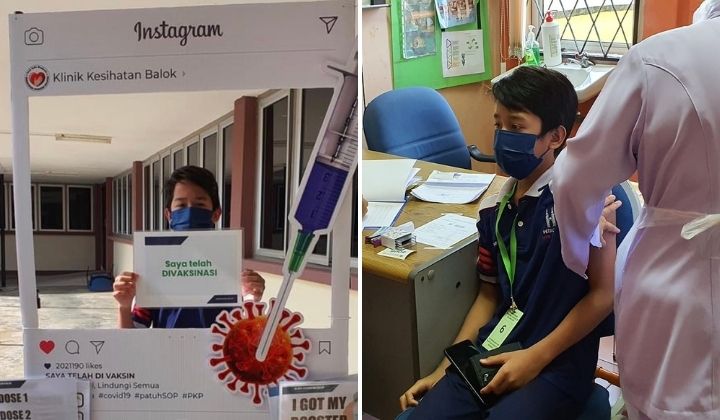 Parents will do anything they can to make sure their children are safe and a couple in Kuantan showed how that can play out in two ways.

Recently, a post online went viral when a woman decided to sue her husband and the Health Ministry (KKM) after her husband took their son to get his Covid-19 vaccine without her consent.

She found out when her husband posted pictures of their 13-year-old son getting the second vaccine dose at Balok Health Clinic on Facebook.

Congratulations Amin. Praise to God. May God protect all of us because of this thoughtful effort of yours.

She aired her grievances via a Facebook post and demanded information about the nurse who gave her son the vaccine.

She said it would be easy to get the nurse’s identity since she has the pictures posted by her husband.

She also claimed that the government does not care about the laws in order to uphold KKM’s Covid-19 vaccination agenda.

In the Facebook post, she mentioned that her son was vaccinated after her husband signed the consent form.

Apparently, she has sent an official letter addressed to the Health Minister, Health-Director General, Pahang Health Director and Kuantan Health Officer to voice her disapproval of the vaccine.

She will also file summons against the Balok Health Clinic staff who vaccinated her son and another summons at the High Court to check the validity of the vaccination consent form by KKM.

Health Minister Khairy Jamaluddin shared the same viral post on his Instagram Story to show that it’s a true story.

Her husband responded online too

Surprisingly, the woman’s husband responded on the viral Twitter thread and said he didn’t secretly vaccinate his children.

I brought all my children to get their vaccines. I’m not afraid of my wife. I am even more afraid if we miss the vaccine appointment.

He also calmly explained that he did that for the safety of their children during the pandemic.

He even compared his actions to how animals are also willing to sacrifice their lives to take care of their young ones.

You don’t need to summon anyone. Just summon me (own husband). I will even back up the government. I can even write 10 justifications if I need to.

He told Khairy on Twitter to ignore his wife’s complaints and not to worry about it.

Netizens were amused and perplexed by the couple’s argument online.

Some found the couple’s relationship strange and wondered how it lasted all this while.

However, there are a few of them who think the way the couple fought and disagreed online was really cute.

Needless to say, the couple has fans and supporters of their own.

Hopefully, it all ends on a good note for the family at the end of the drama.