The police officer cleared the drain to relieve the flood on the road. 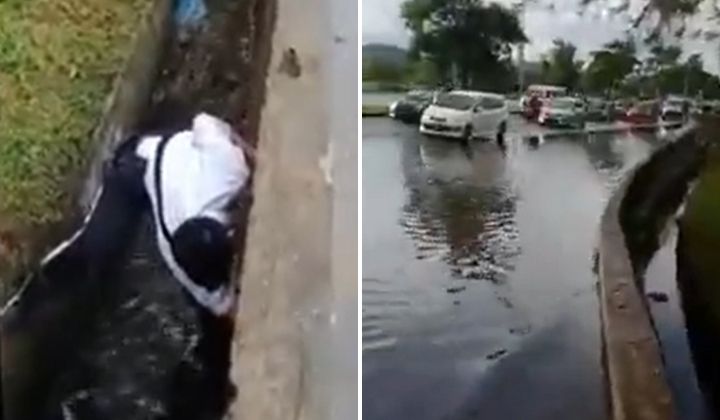 The floods last year have damaged many homes and vehicles. Victims of the flood now worry whenever there’s rain and they hope it’s not a continuous downpour.

As always, many point the blame at clogged drains and the lack of action taken to clean it all up. It’s an age-old problem that hasn’t seen an effective solution.

Despite this, Malaysians always do the best with what they can.

Recently, a police officer was caught on video helping to clear a blocked drain hole.

The road was partially flooded so the police officer jumped into the drain next to it and decided to clear the blockage himself.

Using his hand, he tried to dig out debris that clogged the drainage hole. At times, he used a fallen tree branch to scrape out the debris.

After some time, he managed to dislodge the debris and the stagnant water on the road began to flow into the drain.

Beyond the call of duty. I sent this to the IGP hope he responds and rewards this officer. pic.twitter.com/IwAO5l0idj

Netizens praised the police officer for going beyond his duty to help motorists on the road.

It’s important to clear the pool of water on the road too to prevent road mishaps and accidents.

READ MORE: Flooded Drain In Kota Tinggi Not Fixed Until A Man Got Hurt, Netizens Are Livid

A netizen also reminded everyone not to litter because it can cause a lot of problems for others if the drains get clogged.

Beyond the call of duty. I sent this to the IGP hope he responds and rewards this officer. pic.twitter.com/IwAO5l0idj

However, another netizen wondered why the city council did not clean the drains instead.

Police going above and beyond duty

It’s not the first time our Malaysian police have gone above and beyond their duties.

When the flood took place, several police officers helped the flood victims first before they could even help their own families.

READ MORE: “It Happened So Fast” Policeman’s House Flooded While On Duty To Save Other Victims

It’s also not the first time a police officer helped to clear a blocked drain.

In a report by Malaysiakini in 2019, another police officer cleared a clogged drain at Jalan Raja Chulan.

Acts like these are an encouraging reminder that there are many selfless people in the world.