Heading off to university must have felt like an irrevocable life change that it made the student cry. 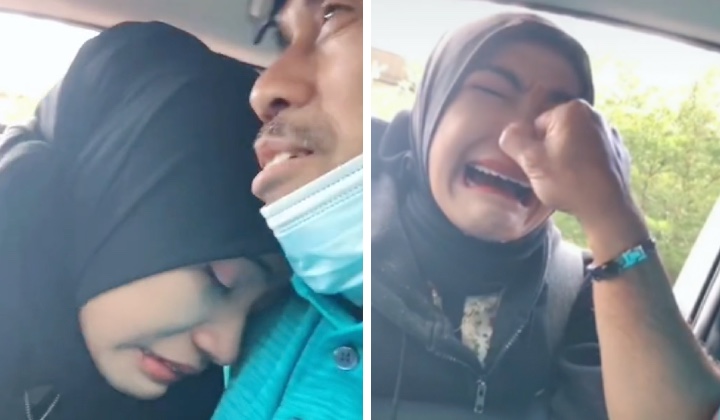 For the sake of ideals and dreams, many children would leave their parents to travel far away in order to study and have a secure future.

While regarded as a measure of achievement – a sign that one is prepared for the world – there is also the pain of separation.

It is real and can go far beyond simply missing their parents after they’re gone, with a very real sense of loss and homesickness.

The same thing was experienced by this girl when she had to stay away from her parents to further her studies.

In a video uploaded by a TikTok user known as @asfaafza_zak, the girl was seen crying at the car window.

Leaving Home Can Be A Stressful Time

It is understood that the girl cried because she missed her parents too much after not meeting for four months because she was continuing her studies.

What is even more interesting is when the girl’s father teased her by rubbing his daughter’s nose while she was crying.

In the video, the voice of the girl’s mother can also be heard saying “let’s go back” after seeing her daughter crying because she misses them too much.

The situation became funnily awkward when the girl immediately responded to her mother’s words after being invited home.

Beautiful Even When Crying

Netizens were heartened by the girl’s outpouring of emotion and praised her for looking beautiful even when crying.

They were encouraged by the closeness between the father and his daughter, especially the dad’s comforting ways.

Surely, the father had shaped his life around the nurturing of his daughter.

Some believed the daughter could be the youngest child.

After all, the youngest sibling tends to be mom and dad’s favourite.

Hopefully, she will be able to take a few moments for herself and acknowledge the depth of her feeling.

In any case, it is likely that her parents also felt the pain of an empty nest at home, but stayed strong for the child’s sake.