The daughter gifted her parents a bouquet of RM10 notes because she missed them while working outstation. 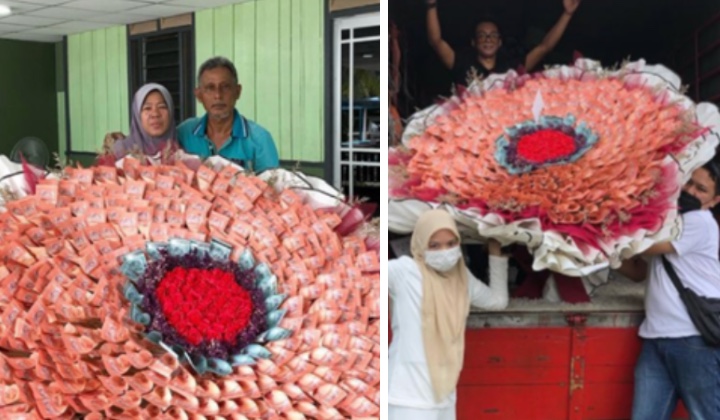 What bouquet would you like to get as a gift?

Flowers are nice, but for many people, a bouquet of money is often the best bunch especially when presented to loved ones.

No matter how much money is placed, it will surely turn out to be eye-catching and a pleasant surprise on a special occasion.

Sure, they say money can’t buy you love, but that didn’t deter a daughter who recently gave her parents a huge bouquet of “flowers” made from hundreds of RM10 banknotes.

Accordingly, she missed her parents while working outstation.

Even more surprising was the size of the bouquet.

It was so large and heavy, that it had to be delivered in a truck.

Through a TikTok video uploaded by @noraziemahahmad, the daughter can be seen transporting the giant bouquet of money, decked with RM10 notes, onto the truck.

Because the bouquet of money was too large, it seemed like an umbrella when being delivered to the recipient’s house.

It is understood that the floral-cum-financial show of filial piety is worth RM6,000.

It is not known how long the arrangement took to complete.

The Virtue Of Respect And Deference

Netizens commented that the daughter really loves her parents.

Her quality stands out even more in a time and age where a rapidly modernised and urbanising society is changing relationships between both the old and young generations.

They praised her for her filial piety, which has long been a part of the nation’s social fabric.

Filial piety often carries the expectation that younger generations will care for their elders, often financially.

Of course, it’s not to say that older people do not have the resources to take care of themselves.

For her effort, netizens also hope that the daughter will be blessed many folds in return.

At the same time, netizens did not forget to point out that it was a beautiful bouquet.