Even the cheapest garden can become expensive too when the trend is really booming. 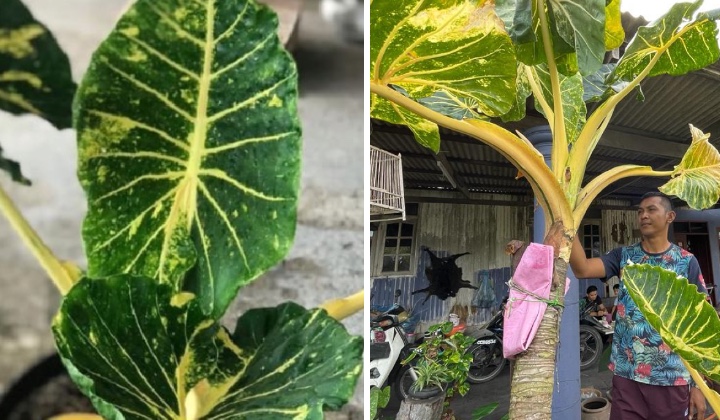 There’s an old Malay saying, “tuah ayam nampak di kaki, tuah manusia tiada siapa tahu” – it literally means you can tell the fate of the chicken from its claws but not so for human beings.

That is the appropriate proverb given to an imported yam seller in Pasir Puteh, Kelantan for owning a foreign yam tree known as Alocasia New Guinea Gold.

The tree – with a magnificent golden yellow trunk and big leaves – can fetch more than RM100,000 per tree.

In other words, it is equal to a Honda Civic or Proton X70 car.

Its owner Muhamad Fathi Mat Jat, who was met by Kosmo Online, said he bought an Alocasia New Guinea Gold at RM80 about five years ago to be used as a parent tree.

A parent tree is a tree from which a small section or scion is cut and grafted onto a rootstock to propagate a new tree.

Now, the parent tree that I have is 2.7 meters tall and according to the market, the price is over RM100,000. This parent tree is capable of producing up to 2,000 saplings at once, but I do not intend to sell them.

Muhamad Fathi Mat Jat on the return of his investment

According to Muhamad Fathi, what’s special about the yam tree is the golden yellow texture of the tree trunk, hence the moniker ‘916 Golden Yam’ given by its fans.

He initially planted the yam species as a hobby at home but has now become a foremost supplier of the hard-to-find breed in Kelantan.

Apart from the Alocasia New Guinea Gold breed, Fathi also has other ‘luxury’ yam breeds such as Black Mabel Taro, Mojito, Mickey Way, Black Lava and also the Pharaoh’s Mask, each of which has a value of up to tens of thousands of ringgit.

The price of a yam tree is evaluated based on the art texture, shape of the tuber, the shape of the leaves, colour highlights, leaf patterns and the size of the yam.

Muhamad Fathi Mat Jat on the demand for the exotic yam