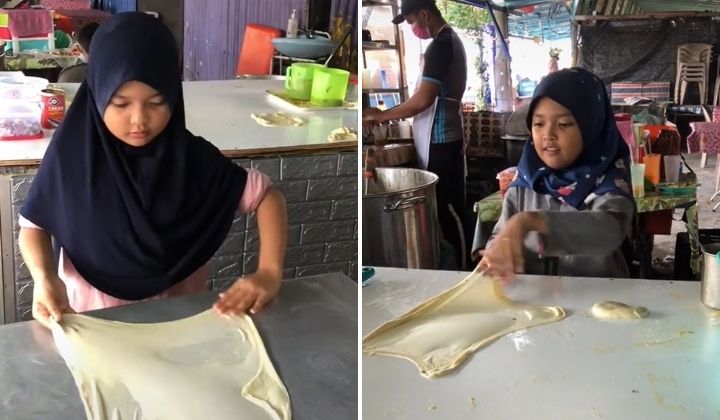 A 7-year-old girl’s amazing roti canai flipping skills caught the attention of many customers at her family’s stall located near the Balai Baru traffic junction in Perlis.

Yusra Asna Ruslin learned how to flip the roti canai from her parents, Ruslin Meli (45) and Yuwita Shuib (35) about three months ago.

The family works together at the food stall named Uwita Enterprise.

Yusra said it was tough to learn at first but after practising a number of times, she managed to master flipping the roti canai.

Feeling confident with her skills, she told her parents she wanted to help out in the store.

According to Kosmo, Yusra has been able to make 50 to 60 pieces of roti canai daily.

So, how did Yusra get into it? According to her father, he brought his three children to the stall to help him out with the business.

It was also a way to get them away from their phones.

He admitted that when Yusra first started learning, there were lots of damaged roti canai but she never felt discouraged and continued learning from her mother.

Her teachers also patronised the stall and encouraged Yusra which built up her confidence.

Yusra, the third child among four children, said she dreams of opening her own restaurant one day with her father

If you want to see Yusra in action, the stall opens from 6 am to 11 am every day except Monday and Tuesday.

Netizens were impressed with her skills and praised the young girl’s dedication.