Instead of waiting for the local authorities, Pahang assemblyman Sim Chon Siang grabbed a shovel and went to work. 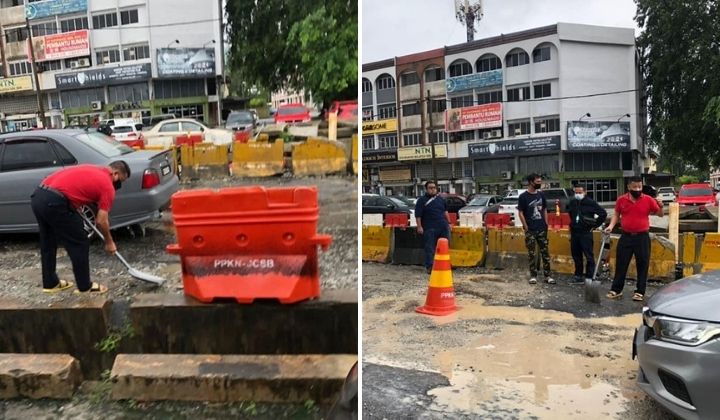 As we all know, potholes are common on Malaysian roads. The lack of action from the proper authorities has spurred many people to employ creative ways to get the roads fixed.

Sometimes the fixes come a little too late after an accident or two have taken place.

Tired of waiting for the relevant authorities to repair potholes on the road, Pahang State Legislative assemblyman for Teruntum Sim Chon Siang took matters into his own hands.

Armed with a shovel, he decided to fix the potholes along Jalan Beserah with the tools he had on Monday, 3 January.

I can’t stand the slow action taken by the relevant parties to repair the damaged roads that are causing traffic congestion in Jalan Beserah.

Based on the pictures uploaded on his Facebook, he also helped to direct traffic while the road was in the process of getting repaired.

Several contractors appeared around 1.38 pm to help place crusher run on the affected roads as a temporary fix.

Crusher run is a blended mix of coarse and fine aggregate which acts as a good and stable base in soft or wet conditions.

Sim said that he hopes the authorities will repair the roads as soon as possible too.

A few days later, Sim sprung into action again to help the community.

He helped to fill up another pothole as a temporary measure at Jalan Haji Junid today (5 January) after an accident involving a motorcycle took place there.

Many netizens thanked him for being proactive in fixing the potholes and praised him for a job well done.

A netizen shared how they were glad that they voted for the right person during the election.

As the saying goes, we must all lead by example. Let’s hope we’ll get to see and hear about more proactive community leaders.