The young boy showed age is also not a barrier to help others in need. 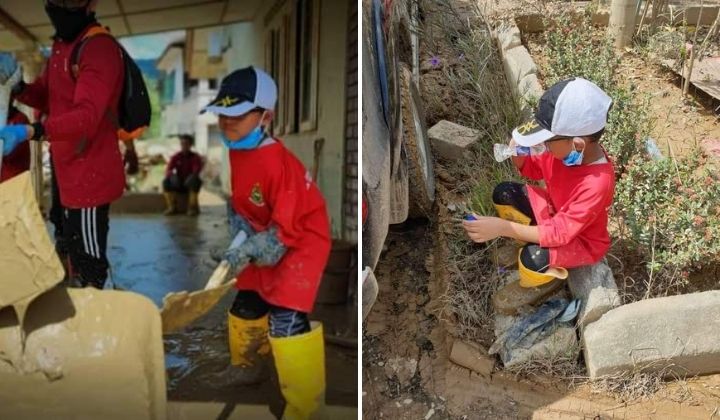 The heavy floods in several parts of Malaysia have shown many people from all walks of life helping each other.

A man popularly known as Abang Viva drove all the way from Melaka to Shah Alam with just a boat on his humble Perodua Viva to help the flood victims.

People also helped to clean up places of worship regardless of their different faiths and beliefs, which warmed many hearts during the trying times.

Recently, a young boy showed how one’s age isn’t a barrier to helping others too.

Age is not a barrier. Kudos to the youngest volunteer.

The photo showed a young boy wearing a red t-shirt belonging to a volunteer group and yellow rubber boots.

In the other photos, he could be seen cleaning and shovelling mud into a wheelbarrow from the houses of flood victims.

Twitter user @nurassyaheera told World of Buzz that the boy is a friend’s nephew who initially posted the photos on Facebook.

Netizens praised the boy and his parents for raising him well. A few even asked for parenting tips from his parents.

May god always bless this small kiddo for his warm good heart, may god bless him with health and wealth!

Bila tengok kanak2 yang macam ni, selalu tertanya, macam mana family dia didik dia. Anyone can give me some tips on how to be a parent?

Despite all the praises, there are some who expressed their worries too. They’re worried that the boy is exposed to all the filth in the floodwater.

READ MORE: How To Prevent Yourself From Getting Water-Borne Diseases From The Flood

Good that the kid wants to volunteer, but he’s being exposed to the filth of the flood water. I hope he’s had his shots. https://t.co/DwJmTHac1i

Netizens also advised him to take precautions and to be careful. They also reminded him to ask for help from the adults if the tasks are difficult.

According to a tweet, the young boy has been following his dad to do volunteering work since he was young.

His father wants him to learn how to give back to society when he grows up.

TEDxPetalingStreet Spreads The Joy Of Volunteering