We present to you TRP’s annual year-end recap of the weird, wild, wacky and wonderful things that went viral in Malaysia in 2021. 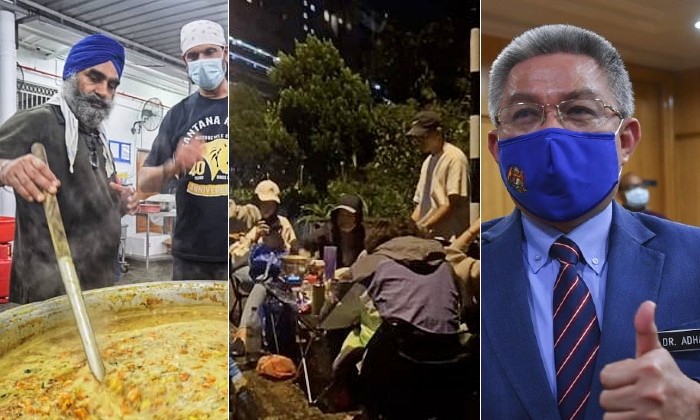 We’re almost certain that we’re not the only ones who feel that there were a lot of things that happened throughout 2021 that we either completely missed out on or intentionally tuned out for the sake of our mental and emotional well-being. 👻

But, as is tradition when New Years comes along – it’s always good and healthy to take a step back and review the year with a fresh mindset and in retrospect of what was said and done, as well as to take a look at our deeds, accomplishments, failings and all the time we got a little “cray-cray” with what was taking place around us.

So, here you go. You know the drill – We present to you TRP’s annual year-end recap of the weird, wild, wacky and wonderful things that went viral in Malaysia in 2021 that might have skipped your social media feeds.

1. That time Malaysians made a ‘Makcik’ cry for helping her business during MCO

This heartwarming story even had us in tears!

So a Penang entrepreneur that netizens took to calling “Mak Idah” got a little emotional during one of her live Facebook feeds that she used to promote and sell ‘bundle’ clothing to make a living during the pandemic.

The woman was deeply moved by the support she received for her business and the endless amounts of love Malaysians had to give her to get through the tough times.

Mak Idah became somewhat of an “influencer” after she went viral – having posted regular updates and personally interacting with her newly found “children” from around the world.

A quick look at Mak Idah’s page shows that she’s still busy running her online business and engaging with her fans to this day.

2. That time the world found out Muhyiddin’s real name

Malaysians went to town when they found out that their Former Prime Minister, Tan Sri Muhyiddin Yassin, was using a “glamour” nickname instead of his own.

So the Shah Alam court made a ruling that the former PM must use the name that’s stated in his MyKad identification – which was actually “Mahiaddin Md Yasin” – to conduct or sign off on any official executive orders.

The decision resulted in Muhyiddin aka. Mahiaddin having to use his real name on official government documents for as long as he remained in office.

However, his personal aid had told people to just refer to him by his glamour name.

Read More: “Muhyiddin Or Mahiaddin?” Shah Alam Court Rules Out Order Made By PM Because He Didn’t Use His Real Name
Read More: It’s Mahiaddin Yassin From Now On For Official Documents, Gov’t Officials Told

3. That time Adham Baba said “Spanish Fly” instead of “Spanish Flu” and got fact-checked

During a press conference, former Health Minister Datuk Dr Adham Baba mentioned “Spanish Fly” instead of “Spanish Flu” several times and said that, compared to the Covid-19 pandemic, had only claimed, more or less, 1 million lives.

In actuality, the Spanish Flu that plagued the world between 1918 and 1920 is estimated to have killed between 20 to 50 million people – making it the deadliest pandemic in history.

Apparently, someone even told on TRP to the authorities and we got word that a police report was supposedly made against us for allegedly slandering and insulting the man in our reporting of the story.

But the Malaysian Communications and Multimedia Commission (MCMC) told Malaysiakini that there were no such investigations being done on the matter.

4. That RM64 million footbridge in Sabah that lead to a dead end.

Malaysians together laughed and criticized the 400-meter elevated walkway called the “KK Skybridge” built in the middle of Kota Kinabalu, Sabah which included a path that lead to nowhere.

The footbridge, which was open for public use in September, was supposed to connect the Asia City complex, the Api-Api commercial centre, Warisan Square, Oceanus Mall and the Center Point Shopping Mall.

However, the path leading to Center Point Shopping Mall was comically blocked by a dead end.

The footpath was estimated to have cost taxpayers around RM64 million to complete (including additional costs and delays).

Read More: [UPDATE] The Government Paid RM64 Million For A Skybridge That Leads To A Dead End
Read More: KK Skybridge Leads To Dead End Because Centre Point Sabah Was “Not Part Of the Plan”

Another hilarious story in TRP’s viral archives is when a million ringgit sportscar was spotted driving under the gates of a highway toll booth without paying the fee.

Video of the incident had Malaysians shaking their heads at how the driver managed to and had the audacity to pull off the cheap trick to avoid paying a small toll.

Things got a lil’ bit “toxic” when The Hong Kong Consumer Council made a discovery that allegedly found cancer-causing substances and misleading labels on 60 pre-packaged biscuits and brands sold in Malaysia.

The report noted that the products contained contaminants such as genotoxic carcinogens glycidol and acrylamide which can lead to cancer.

However, Hup Seng and Jacob’s countered the claims made by the report and said that their biscuits are completely safe for consumption.

It was said that the Health Ministry would be investigating the matter further, but thus far we haven’t seen any updates regarding the issue.

7. That time when camping at Genting Highland resort became a trend

So Malaysian youths had gotten hooked on a TikTok trend which had people “guerrilla camping” at various spots at the Genting Highlands resort and its surrounding areas.

Kids were seen happily, and also a bit haphazardly, pitching up tents and having outdoor picnics in and around the popular tourist spot without proper approval and were basically accused of loitering there.

Since the issue went public, people have been more restrained with their outdoor outings – with some choosing to pick better, more appropriate and less inconvenient places at the highlands to enjoy some fresh mountain air.

News of the flood disaster hitting several parts of the nation sent Malaysians into “beast mode” in efforts to organise and provide relief efforts to victims of the tragedy.

Thousands of volunteers stepped up to sacrifice their time, energy and earnings in order to assist their fellow rakyat – providing them with rescue, shelter and supplies.

However, news broke that there were a number of flood victims who were being a bit too picky with the helping hand that was extended to them.

Our sources at the Gurdwara Sahib Sikh temple in Shah Alam (an entity that has been hard at work providing free food assistance for flood victims) revealed that there were a few people who blatantly rejected their vegetarian food offerings in favour of meat or chicken meals that they say were more suited to their tastebuds.

The situation however did not deter the coordinators and volunteers at the Gurdwara, and they continue to both cook and deliver packaged food supplies to anyone in need throughout the year-end flood season.