Abang Viva’s help for the past few weeks has been recognized by the Malaysia Civil Defence Force. 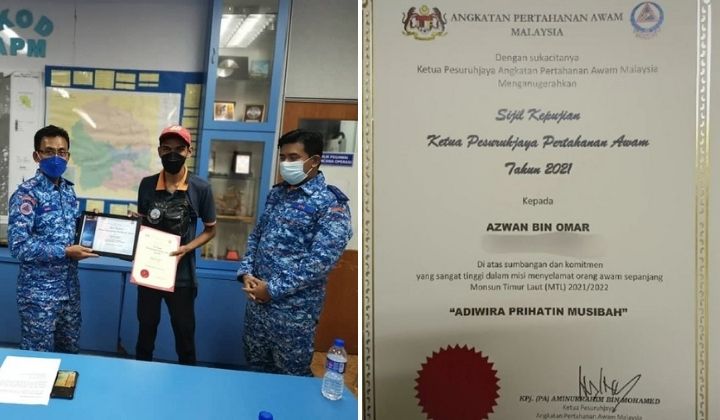 Azwan Omar or more popularly known as Abang Viva has been awarded a certificate of appreciation from the Malaysia Civil Defence Department (APM) for his efforts to help flood victims on his own accord.

He uploaded a video showing a few pictures taken from the certificate acceptance ceremony on his TikTok.

In the caption of his TikTok video, he thanked his parents and strangers for their constant prayers.

Netizens were equally happy and excited that his good deeds were officially recognized.

They believe that he truly deserves the award and even noted his humble attire while receiving the certificate.

Some also thanked him for helping the flood victims in any way he can.

Yes, he’s on TikTok for the sake of accountability!

According to Utusan, he finally opened a TikTok account on 27 December to document how the funds he received are used to help flood victims.

He first went viral for driving all the way to Shah Alam from Melaka with a boat strapped to the top of his car to help flood victims evacuate.

Azwan didn’t ask for much and even reminded others not to give money to people who claim to be him.

READ MORE: Abang Viva Advises The Public Not To Give Money To Those Who Use His Name

There are people who still want to reward him for his good deeds but he’s very careful about accepting these gifts.

Previously, an entrepreneur expressed their intention to gift him a bigger car so he could help more people.

According to Oh My Media, Azwan politely declined the offer because he was afraid he couldn’t maintain the upkeep and the road tax for a larger vehicle.