In addition to entertaining watchers on TikTok, she also shared her efforts in donating to flood victims. 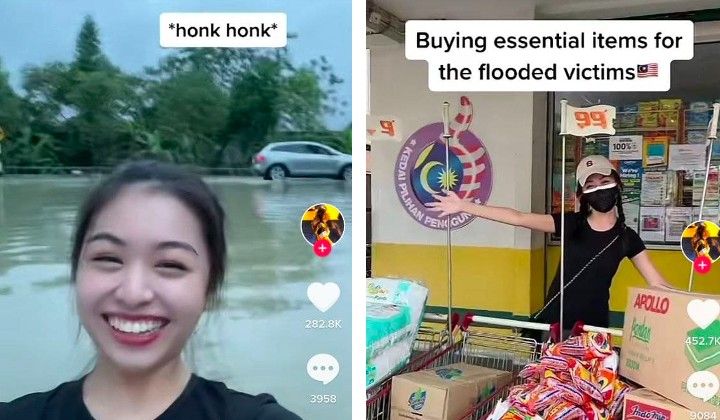 For many, the harrowing flood causes tremendous pain and sadness as many are suffering losses of life, home, and also emotional stability.

However, for some, they tend to just live in the moment.

Recent videos of a Malaysian TikToker @angelloweee dancing in floodwaters angered netizens. Many found her behavior inappropriate for an event that has devastated thousands of families.

The TikTok video garnered around 14M views and 1.2M likes.

Some of the comments expressed how inappropriate her videos are.

“The real cause of disaster”

“People are worrying about flood but she’s playing TikTok. What kind of person?”

“People are worried about the flood but she has the audacity to dance around sexily like that? Oh god. “

A Lot Of People Defended Her

However, her followers and some other people also came to her defense, saying that they shouldn’t judge a book by its cover.

“Why are you condemning her? You think Malaysia only has one religion, yea bro?”

“It’s not like she insulted God or anything. She’s just enjoying and making herself happy. Why are yall angry, boss? That’s just weird.”

“Please don’t condemn her. She just wants to entertain herself and she gives donations to the victims too you know. You, on the other hand, condemning her, what did you donate?”

However, it turns out that @angelloweee isn’t just using the tragedy for online clout, as she also shared videos of herself donating and volunteering.

She is seen buying food and essential item in bulks to bring to the victims of the flood.

Other than that, in her TikTok page, she went volunteering in Masjid Al Munawwarah in Shah Alam and SJKC Pui Ying in Klang.

In these videos, netizens are seen to be supporting her and giving her encouragement.

“Yesterday she was playing with the flood enthusiastically, today she does charity and sends food. Thank you so much sis”

“She’s doing fine by respecting your religion. Those who are commenting ‘May you get guidance’, don’t you all know how to respect other people’s religion too?”

“Suddenly the haters are all busy and quiet”

Being a TikTok star isn’t easy. Once a cabin crew member for Malindo Air, she now enjoys making content and doing TikTok trends to entertain her viewers.

While some Malaysians think that she crossed a line, others say that she is merely making the best of her situation right now. What do you think?

TRP has reached out to @angeloweee for additional comments.