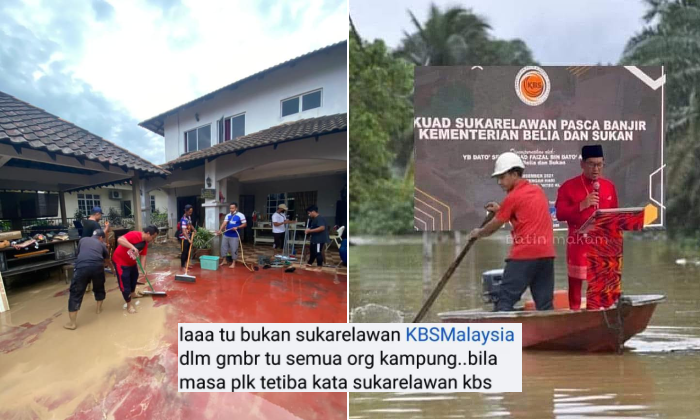 Netizens are claiming that the Youth and Sports Ministry (KBS) had plagiarized the hard work done by locals who volunteered to help clean up the homes of flood victims in Bangi, Selangor.

So as the story goes, KBS’s official social media pages recently (20 December) posted several images with a caption that said that their “Post-Flood Volunteer Squad” together with volunteers from Universiti Kebangsaan Malaysia (UKM) were busy helping to tidy up people’s homes in Kampung Bangi Lama and Kampung Bangi Tambahan that were ravaged by the floods.

The pictures showed several individuals washing up the mud and silt that were left in and around people’s houses and neighbourhoods when floodwaters receded.

In a later posting, KBS said that a total of 126 volunteers from non-government organizations (NGO), sports organizations, the Scouts Association and UKM students were involved in relief efforts in Bangi and invited more youths to join in.

However, a look through the comment section revealed that the postings may have been misleading.

Several people had stepped up to allege that the cleanup effort shown in the pictures had nothing to do with KBS and was in fact participated only by local Bangi residence.

“Laaa, everyone in the pictures are villagers, not volunteers from KBS. Since when did they become KBS volunteers?” wrote one commenter.

“Please check your caption. I’m in the picture. When did I join KBS’s Post-Flood Volunteer Squad? For the admin’s information, the people in the pictures are all local Kampung Bangi youths. Not with KBS,” commented another while urging KBS’s social media handlers to clarify their information and not claim others’ hard work as their own.

Apparently, the comments were soon removed and disappeared from the posting, but netizens were quick enough to save screenshots as proof of what was said.

This started a whole chain reaction resulting in Malaysians bombarding KBS’s social media page with comments, questions and criticism which reads in the note that KBS had lied about what was actually happening and were claiming victories and taking credit for the rakyat’s efforts

Almost every single flood-related posting made by KBS now had people questioning whether the information presented was valid and if the relief efforts being shared were actually participated by KBS volunteers.

Ahmad Faizal had since come out to agree with the criticism he received by saying that the event was indeed uncalled for and promised to do better.