People are visiting this place for its view, but at a cost. 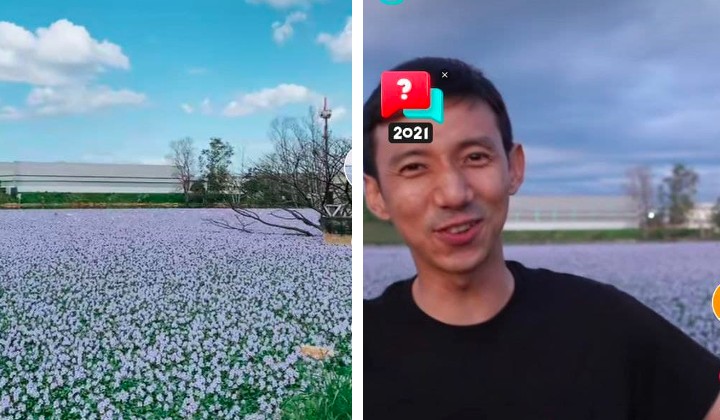 Recently, netizens have been in awe of the elegant scenery people have been posting of beautifully blooming purple flowers floating across a lake in Sungai Petani, Kedah.

But it seems that the magical setting people have come to adore may hold a stinky lil’ secret.

A Tiktok user and also an entertainer, @mr_goy, has uploaded a video garnering around 1.5M views and 100K likes of him going to check out the lake, and it spurred comments of disbelief.

In the video, he was seen introducing netizens to Sungai Petani, a place where people hang out and take pictures beside a sewage plant. Then he signaled a stop to the video as the smell there is horrendous.

However, one particular comment from an individual who claims to be a local there said that the place is not actually a sewage plant, but a natural lake that was supposedly misused to dispose of waste from factories nearby.

This, the commenter claimed, was the source of the foul smell coming from the lake.

This was not the first time somebody shared scenes from the supposed sewage site.

A day before, another TikTok user with the username @youzernoutfaun also uploaded similar footage showcasing the breathtaking view of the lake – as if he’s was vacationing in another country.

His caption was simply, ‘Sungai Petani Sewage Plant’, nothing more. This video went viral with around 685K views and 107K likes.

Comments on the video show people generally making fun of this fact.

“Look, even feces can make a flower bloom. What’s your excuse for being useless?”

“Mom: Where did you go for the photoshoot?

“For as long as I’ve lived, I’m finally contributing something precious to the community”

Another video uploaded on Facebook showed the exact location of this place, which is near Texas Chicken Caltex in Taman Ria Jaya, Sungai Petani, Kedah.

What Kind Of Flowers Are Those?

The purple flowers are actually called Common Water Hyacinth (Bunga Keladi Bunting) with the scientific name of Eichhornia crassipes. They are commonly seen in lakes and ponds.

They can be both an advantage and a disadvantage for the environment, depending on which angle they are seen in.

The plus side of this is that aquatic plants like these are used as a method for wastewater treatment.

Researchers have found out that water hyacinths flourish on sewage by absorbing and digesting nutrients as well as minerals from wastewater.

On the bad side, in some areas, it is known to be an invasive species due to its fast-growing ability to blanket large portions of lakes and cut the supply of sunlight and dissolved oxygen for aquatic life under them.

But hey, positive or negative, they’re definitely pretty when they bloom like this, right?

Sadly Now, The Area Is Said To Be Closed

Another site closed in the same month, because of the power of virality.

According to a Facebook post by @KedahKini1, the area is closed for public visitation due to the safety of the citizen.

The particular area that was sealed was the little bridge in the midst of the lake. It does look quite unsafe if you give it a better look.

Nevertheless, viral or not, you should all be careful of places like these. Just because of a well-liked picture, don’t simply risk your safety.