The assemblyman even had receipts to show how expensive chickens were in his constituency. 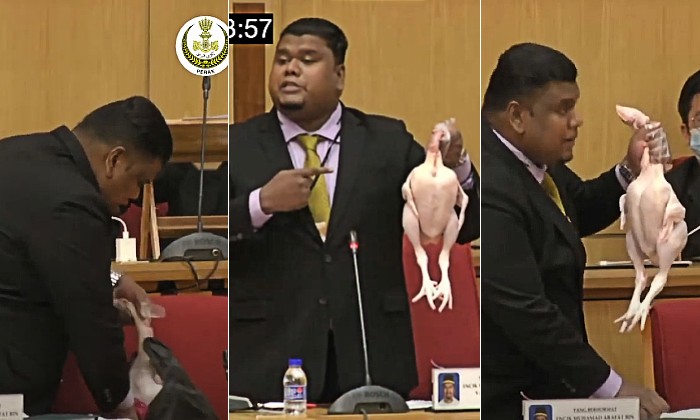 A whole piece of raw chicken made an unprecedented appearance at the Perak State Assembly today (14 December) when Hulu Kinta Assemblyperson (ADUN) Muhamad Arafat Varisai Mahamad served the uncooked bird to the Dewan in protest of expensive price poultry.

“It’s okay, it’s for the good of the people. I’m forced to bring this chicken,” Muhamad Arafat was quoted as saying as he took the chicken out from a bag he had at his side, as an aid to show that the rakyat was struggling to make sense of the rising price of goods and that the government of the day was too slow to take action.

He also asked the state government what exactly it was doing to remedy the situation and claimed that no action has been taken by those in charge to, at the least, create a dialogue with retailers, entrepreneurs and wholesalers in search of the root cause of the problem.

The assemblyman also revealed that the price of chicken in his constituency was being sold beyond the ceiling price set by the government under its Harga Maksima Keluarga Malaysia (Malaysian Family Max Price) scheme.

“Before 7 December, the price of chicken in Gunung Semanggol already soared to over RM10 per kg. After the 7th, the (ceiling price) Harga Maksima Keluarga Malaysia scheme set by the Domestic Trade and Consumer Ministry (KPDNHEP) was RM9.30,” said the politician as he pulled out the purchasing receipt he brought together with the chicken as evidence of extreme prices of goods.

Online, videos of Muhamad Arafat pulling his bird out made him into an internet legend.

Netizens, together, had themselves a laugh and praised the politician for bringing up a topic of public concern in such a flamboyant manner.

He literally brought an actual issue to the assembly. Kudos to him🤣 https://t.co/ZssF90tJwy

Now this is what we should be having more of.