The Asian Water Monitor is unlikely to be hurt despite the expert toss. 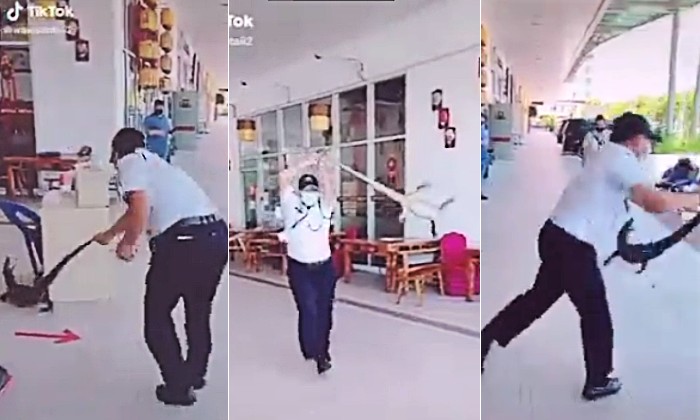 The internet spiralled out of control at the sight of a shopping mall security guard in Kota Kinabalu, Sabah who was caught performing some tactical manoeuvres on camera in order to get rid of a wild monitor lizard that somehow found its way into the building.

The 10-second TikTok video reshared by the Daily Express Sabah Twitter page witnessed the man holding the reptile by its tail and flailing it around like a helicopter over his head, before tossing the animal out onto the street several meters away.

Accompanying the video was the popular “Helikopter” song performed by Bosnian singer Fazlija, which has become the internet’s latest soundtrack.

Though there were a few people who showed concern that it might have been cruel to dispose of the animal in such a way, there were those who stepped in to say that the helicopter twirl and toss done by the guard was necessary to keep the animal from hurting him.

One commenter even throws in a physics lesson and wrote that “yes, the helicopter swing is necessary for his own safety, the centrifugal force from the swing prevents the lizard from turning its back and bite.”

Note the lizard biting the chair before the guard yeet it across the road. I’d say the helicopter swing is needed otherwise he’d have an appendage bitten off. https://t.co/6jy7Tde0he

Some stated that the monitor lizard was tough enough to be handled in such a way.

Whoever’s saying it’s abusive, biawak is :
1. They have thick skin, survived since dinosaur age. They’re literally dinosaur just like crocodile. Freaking reptiles!
2. Swing is needed to make sure the biawak won’t bite the guard, he could lose fingers and limbs. Poisonous too.

While others were simply impressed by how bold the security guard was at removing the animal from the premises.

Give this guy a datukship https://t.co/OrKZbvvU47

The Asian Water Monitor, or the “Biawak Air” as we locals call ‘em here in Malaysia, can pack a pretty nasty bite.

Though they are not known for attacking humans, these big reptiles – which sometimes can reach up to 3 meters from head to tail – have sharp, serrated teeth and even possess venom – that’s non-lethal to humans but can still leave a bite prone to infection.

Biawaks are known to have very powerful tails that they use to swim with and swing at anything they see threatening.

They also have sharp claws that make ’em excellent climbers and can leave more than a scratch too.

As their name implies, the biawak thrives in terrestrial habitats close to freshwater, but they are also known to be very comfortable in saltwater environments.

And just like the “Ular Sawa Batik”, habitat loss is said to be having a weird effect on the lizard’s population.

Read More: They Found 2 Huge “Anacondas” At A Construction Site In Terengganu

The Department of Wildlife and National Parks (PERHILITAN) explained that biawaks are thriving in habitats that have replaced natural forests, like plantations – providing them with the perfect agroforest habitat to hunt for food.

Thousands of these prehistoric-looking creatures also reportedly become roadkill in Malaysia each year.