Chopsticks weren’t the only things on Dr Mahathir’s mind. 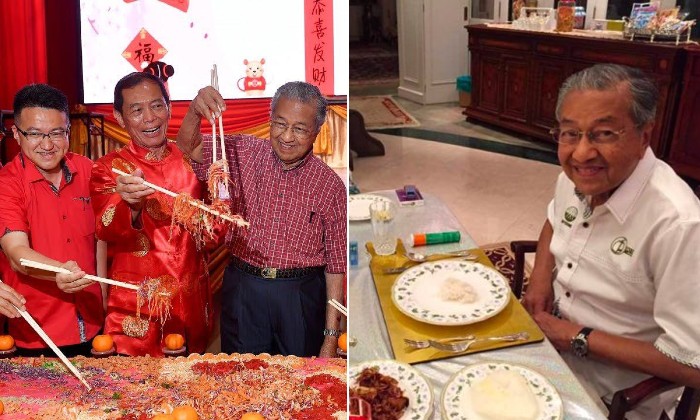 So our longest-standing former premier, Tun Dr Mahathir Mohamad, became a quick meme on Malaysian cyberspace this week after saying some stuff that people thought to be a bit funny.

At the launch of his latest memoir called “Capturing Hope: The Struggle Continues for A New Malaysia” yesterday (12 December), the 96-year-old made peculiar comments about the country’s history and state of affairs.

Some of the things he said that caught people’s attention was about Malaysian Chinese people and their apparent affinity for using chopsticks, having the letter X and Z in their names, and some other things.

The comment was captured on video and also quoted by news outlets before becoming a trending topic among netizens.

Also Mahathir when he wants the Chinese vote https://t.co/pLIzWrHQYn pic.twitter.com/XEz9R5yQbx

Mahathir: They (Chinese) don’t eat with their hands.

During the recorded Q&A session he had at his book launch, Dr Mahathir spoke about how some Malaysians have difficulty assimilating with the Malays here in the country.

What Did GIFfrom What GIFs

Dr Mahathir said that Malaysians, particularly the Chinese and Indians, identify themselves with the countries that their ancestors came from and this was the reason they cannot be assimilated.

At the beginning, when we were struggling for independence, we need the cooperation and support of all the communities. So the communities insist that their identities should be maintained. So even when they become Malaysians, their identity, their connection with the countries they came from must be maintained. So in Malaysia, Malaysians link their race to the countries they come from. They are not like their great grandfathers who are actually born in China and come here. They are born here, brought up here, grew up here, but they still link with the previous. So this divides the people. This is a Chinese Malaysian, this is an Indian Malaysian, this is a Malay. So because of that, they cannot be assimilated.

Malaysians have trouble letting go of the ‘old country’

Dr Mahathir said that in other countries, people would adopt the identities of the country they had gained citizenship. This, he explained, wasn’t happening in Malaysia and becomes what separates the people.

In other countries, multiracial countries, once they adopt the citizenship of a country, they identify themselves only with that country and no longer with their grandfathers came from. For example, President Eisenhower is a German. He led America against Germany. He is an American, not a German. But here, we still have people looking back to the old country where they came from and adopting some of the practices there. Like changing names for example, because China decided to spell names with a lot of X’s, Z’s and all that, now Malaysians are also doing that. But we are Malaysians we have our own Chinese, you see. But the tendency is always to identify with the country of origin. So this separates the people, you are of Chinese origin, you are of Indian origin, you are Malay, local indigenous people.

Other races don’t want to be Malay, that’s the problem

Dr Mahathir said that politics in Malaysia has always been based on race and that part of the problem was that other races didn’t want to let go of their own identities and consider themselves Malay instead.

So because of this identity with race on the ground, among the people, you cannot have a multiracial party that is trusted by everyone. But politics in Malaysia has always been based on race, but it’s not all true because we have a lot of Indians and Arabs who came here and become Malays, because they dropped their own language, they speak Malay, (adopt) the Malay customs, names and all that were Malay. They were accepted by the Malays as Malays. Even though it’s obvious that they were not Malays. But the others do not want to identify themselves with Malays. That is the problem.

When asked if Malaysia should adopt Indonesia’s way of assimilating its large population, Dr Mahathir said that, unlike our neighbour, Malaysians from different races want to preserve their customs and cultural identity.

Although (their population is) much larger than Malaysia, they (the Chinese) make up 10% of people in Indonesia. So if you get around in Indonesia, if you don’t adopt the Indonesian language, behave like Indonesians you find yourself isolated. But in Malaysia of course we have 26 to 30% Chinese and 10% Indians, and they preserve their own community and their own customs, their own ways of living. So they are not, for example, let’s say, the Chinese eat with chopsticks, we will eat with our hands. They have not adopted the Malaysian way of eating food they retain the chopstick, which is an identity with China, not with Malaysia, and many, many other things.