The two reticulated pythons weighed a whopping 250kg and over 100kg and measured at 5.8m and 4.2m, each. 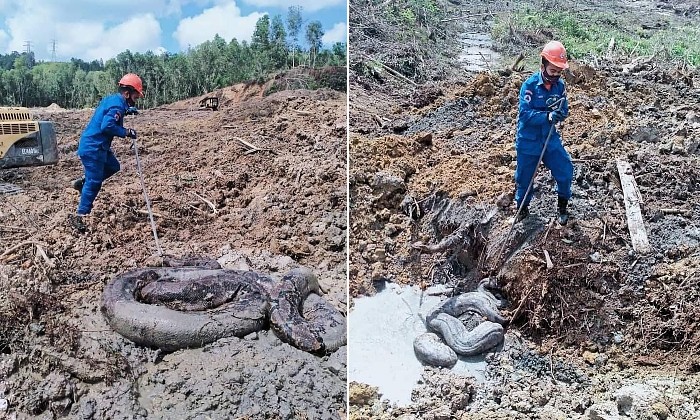 The Malaysian Civil Defence Force (APM) had to be called into a construction site in Marang, Terengganu yesterday when workers apparently dug up two huge reticulated pythons in Kampung Gong Nangka.

“The discovery of two Anacondas in Terengganu,” wrote the caption on APM’s official social media channels, describing how huge the two gigantic pythons were.

Images shared online showed APM personnel standing over the snakes in a barren and muddy patch of land, which still had a touch of greenery left in the background, before transporting ’em into a back of a truck.

The construction crew were said to have been shocked when they found the two snakes there.

Netizens online were obviously impressed by such a discovery and someone even asked if the snakes were still alive?

By the looks of the restraining tool used by the APM personnel on the animals’ heads, it might be safe to assume that they still are, and we hope that they’re safely relocated to a less disturbed habitat.

Despite pop culture telling us that the anaconda is the biggest meanest snake around, the Reticulated Python, or the “Ular Sawa Batik” as we call ’em here in Malaysia, can actually grow to be longer than the Green Anaconda – credited to be the biggest and heaviest snake in the world.

Found throughout most parts of Southeast Asia, the Malayopython reticulatus can reach up to 10m in length – which is taller than a giraffe!

These pythons make their home in forested and shrubland areas, and also like to hang around rivers and lakes.

But the species is known to make do with living in urban habitats close to human populations and are even said to have been found in sewers in East Malaysia, Singapore and Indonesia.

Though the reticulated python is not listed as an endangered species in the International Union for Conservation of Nature (IUCN) Red List of Threatened Species, habitat loss is said to be having a weird and unexpected effect on them.

According to a report by the Department of Wildlife and National Parks (PERHILITAN), the reticulated pythons are actually thriving in habitats that have replaced natural forests, like plantations and orchards.

These agroforest systems are said to be increasing the availability of sustainable habitat for the python – able to provide them with prey to feed on, dense cover, and filled with water sources provided by drainage systems and aqueducts.