sam’s amazing illustrations even got a shout out form the star of one of the movies he drew. 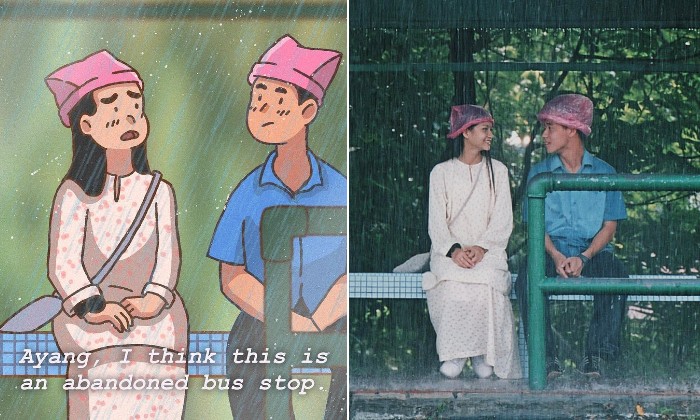 There’s just something about watching some feel-good Malaysian-made movies that make locals, well… Feel good inside!

Some get hooked on the drama, others might come for the comedy, while most (we’re pretty sure) just bask in the enjoyment of watching characters that they can closely relate to unfold to tell stories that take us back to yesteryears or dream of better days to come.

So it’s easy to get why netizens came together in celebration of our local cinema scene when illustrator @samruzone shared his reimaginings of nostalgic scenes from five “masterpiece” movies made by legendary filmmakers: P. Ramlee, Mamat Khalid and Yasmin Ahmad.

Sharing his work on social media, sam prays that the art and vision showcased in these great films would forever be remembered – And from the looks of the comments online, his wish surely came true!

All the movie scenes I redraw this year from our legendary Malaysian movie directors, P.Ramlee, Mamat Khalid and Yasmin Ahmad. May their art and vision in the movies that they made, be forever remembered as masterpieces. Alfatihah buat mereka. pic.twitter.com/9VOrcYWX1y

“OMG, this brings back lots of good memories!” wrote one commenter.

“I miss these old stories, they invoke so many memories,” wrote another, while many took to reminisce their own treasured recollection of the movies and recalled some of their favourite scenes.

sam’s work even got a shout out from one of the stars of the films he’d depicted in his illustrations, local actress Sharifah Amani who appeared in the movie “Sepet”.

But if you’re already itching to give these iconic shows a go, here’s our quick synopsis of the five masterpiece movies for your viewing pleasure:

Directed and starred by P. Ramlee, Madu Tiga is a black-and-white romantic comedy released in 1964.

The film features the hilarious story of a married man who takes on a second and then a third wife without any of them knowing about it.

The movie follows the chaos that ensues as the married man enacts his devious plans to keep his wives from finding out the truth behind the polygamous nature of their relationship when the three women unexpectedly became friends with each other.

A screenplay by director Mamat Khalid, Man Laksa is a comedy that came out in 2006 and tells the story of Man a Laksa hawker in a small village who dreams of success and being wedded with the girl of his dreams, who is the daughter of the Ketua Kampung or village chief.

So one day the village decides to throw a fundraiser/talent show that turned chaotic when the main acts didn’t show up and Man is forced to step up and put a show together and win the heart of his crush and her father.

A film that came out in the 60s, ABBL was written, directed and starred by P. Ramlee based on the “1001 Arabian Nights, Tale of Ali Baba And The Forty Thieves”.

Set in a faraway land, the story revolves around the life of Ali Baba, a poor man who came across unimaginable fortune when he stumbled upon a magical cave filled with riches that was stored there by a notorious gang of 40 thieves led by a smart and ruthless leader.

Ali Baba, with the help of his wife and their servant, had to later defend their home from being robbed and possibly getting killed by the same gang that he had stolen and gotten rich from.

Sepet is a romantic comedy and drama directed by Yasmin Ahmad.

Released in cinemas in 2005, the movie is set around the interracial love story between Ah Loong the Chinese boy and a Malay girl named Orked.

The two struggle to maintain their relationship while faced with stereotypes, racism and social pressures.

Though the ending to the movie is left for the imagination, some people say that Ah Loong and Orked got their “happily ever after” in the following movie also made by Yasmin Ahmad called Mukhsin, so do check these two movies out to know the full story.

PBL is a comedy that came out in 1959 and was started by legendary trio P. Ramlee S. Shamsuddin and Aziz Sattar.

The film is actually part of a quadrilogy made by P. Ramlee that follows the life and comedic tragedies of three bujang lapok or “old bachelors” as they try to make a living.

The plot of PBL revolves around the mischievous adventures of Ramli, Ajis and Sudi who are on their way to find a legendary silat master named Pendekar Mustar to teach them how to fight.

The three soon became smitten by their new master’s daughter and tries to win her heart as they train to become “pendekars” or warriors themselves before endeavouring to rescue the maiden who’s later kidnapped by a band of thugs.

Some of these movies are still available for viewing on TV services like Astro or streaming services like Netflix and others, and if you’re really try hard enough, you can even find them shared on sites like YouTube. (Not that we’re encouraging you to do so. Please pay for your content people!)

And if you’d like to see more of sam’s artistic illustrations, do check out his Instagram page (HERE).