Danish said that the production didn’t let him know that the show included such romantically charged scenes. 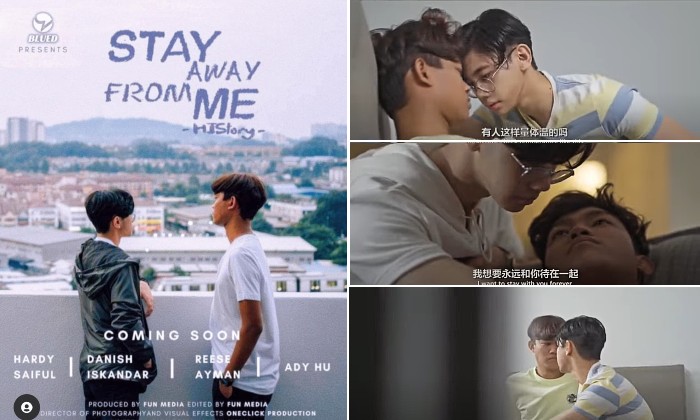 A Malaysian celebrity is in a lot of heat after starring in a local gay drama series promoting a gay dating service, without even knowing about it.

17-year-old actor and TikTok content creator, Danish Iskandar, received backlash for his appearance in a web series titled “Stay Away From Me” released on a chat and dating app called “Blued” – that’s apparently popular with the LGBTQ community.

Snippets of the drama shared online saw Danish together with another actor portraying some, allegedly, romantically charged scenes that came as a shock to some people online.

Faced with the controversy, Danish went on social media to explain that he initially had no idea that the drama was plotted around a boy-and-boy love story.

“The production didn’t clarify anything about a gay app. They just gave me the storyline that didn’t include any such scenes, so they added certain scenes that weren’t in the storyboard at the last minute,” he wrote on Twitter explaining that the show had included last-minute reshoots and that he was a victim of those circumstances.

the production wasnt clarified about gay app,they just gave the storyline yang takde langsung scene scene mcm tu so they added certain scene tht aren’t in the storyboard on the last minute, so yea its my fault cause teruskan jugak shooting tu, i wont do it again, im mngsa keadaan

Danish also released a video on TikTok to apologise for his supposed mistakes and asked netizens to quit making the issue viral – saying that it was only helping to further promote the show and the app.

He also explained that he and his parents would be taking legal action against the production company for tarnishing his image and their refusal to take any responsibility for what’s happening.

so guys , my parents proceed to take legal action memandangkan production tu sendiri tanak bertanggungjawab , and im sorry for everything if theres anything wrong , i will be careful and aware next time so yea just doakan yang baik baik

Danish told Harian Metro that the production had promised to pay him to further promote the drama, but he refused.

He shared that he was also now being harassed and bombarded with personal questions online since the issue became public.

The actor stressed that his portrayal in the drama was only acting and not real.

Out of the closet

With the controversy now becoming hot gossip, the government wants in on the action too.

Reportedly, the Malaysian Islamic Development Department (JAKIM) is prepared to seek advice from the Malaysian Communications and Multimedia Commission (MCMC) on how to proceed with the issue.

“It’s a norm for unethical Malaysians. All religions do not accept the concept of being gay,” he said explaining that only state religious authorities had the jurisdiction to investigate and persecute on the matter.

He said that state religious authorities may call the actor in for questioning if the incident happened within their borders.