Malaysian singer Francissca Peter shares her pride of being the first Proton girl and for singing the Proton Saga theme song during the car’s first launch in the 1980s. 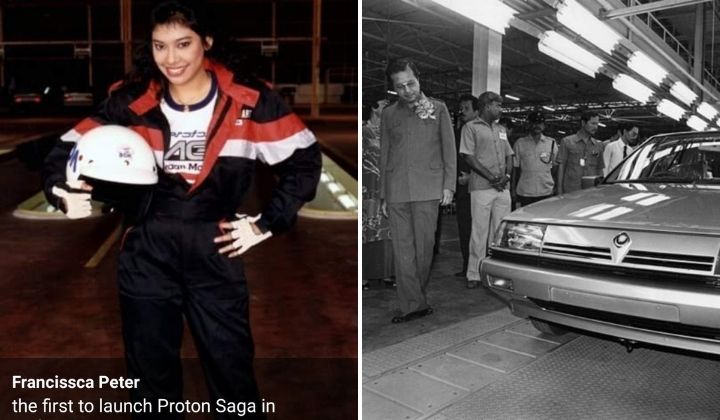 Malaysian singer Francissca Peter shared a throwback photo of her being the face of Proton on her Twitter today.

In the photo, she proudly held a helmet while wearing the gear provided to her for the Proton launch in the 1980s.

#flashbackprotonsaga During the launch of our Malaysian National car Proton Saga. I was the Proton gal. This was the gear I was given to wear on the day of the launch years back. And below is an acapella short clip of the Proton Saga theme song. I shared a short story on YouTube. pic.twitter.com/G2EYjqIg6F

Most of us have also forgotten that Peter sang Proton Saga’s theme song, titled Kejayaan Malaysia, too.

Since she couldn’t find the full theme song and jingle on Youtube to share, she decided to sing the song acapella and posted a Youtube video for all to hear.

In the video, she shared fond memories of being the Proton girl and the pride she felt when she saw a Proton Saga being used as a London cab.

She was all smiles and kept telling the cab driver excitedly that he was driving a Malaysian car.

Her heart burst with pride when the cab driver commented that it was a good car.

Proton Saga pride was huge then

Malaysians, like Peter, were proud of the first generation Proton Saga because it was a fully Malaysian-made car and a symbol of achievement.

According to Carsome, a Sagathon Rally was held in Sabah-Sarawak a week before the official launch of the first generation Proton Saga to prove the vehicle’s capabilities.

The 12 Proton Sagas in the race proved to be durable and held well without issues in the 4,109km journey over mountainous roads.

Since Proton’s merger with Geely in 2017, Malaysians are feeling torn whether the cars produced can still be legitimately be known as a national car brand and whether Malaysia still needs one.