Netizens poked fun at how the “system” seemed to benefit some more than most. 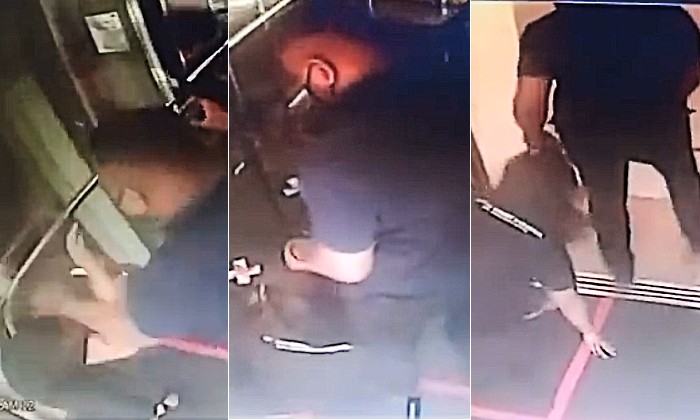 Malaysians were upset and also had a lil’ fun joking around when they learned that a police officer who allegedly attacked a woman inside an elevator at a building in Jalan Chan Sow Lin, Kuala Lumpur was only being transferred to another department while investigations are carried out.

So last week, the Cheras Police identified a suspect caught on CCTV footage assaulting the victim as a “public servant”.

Later, Free Malaysia Today reported Selangor Police Chief Datuk Arjunaidi Mohamed clarifying that the suspect was not a “high ranking” police officer, but instead a “detective corporal” stationed with the Selangor police contingent.

The Chief explained that the 35-year-old officer was being relieved from detective work and temporarily transferred to administrative duties while the KL police investigate the case further.

The Chief mentions that a disciplinary enquiry was also being conducted on the officer on top of the criminal investigation.

Saying that the actions taken against the police officer were nothing more than a slap on the wrist, netizens came to question why the authorities were being lenient.

“If it was a civilian, would have been arrested, put into jail and remanded while under investigation and later charged. Why is he still out and about endangering the public?” questioned one commenter.

“How can he still be a police at this point? That’s my question,” asked another.

One commenter asked “Isn’t this a dangerous precedent when you transfer a gangster instead of terminating him,” and personally tagged Prime Minister Datuk Sri Ismail Sabri’s Twitter account and other public figures.

“Transferred to another department instead of just getting fired? He hit somebody okay,” wrote another user.

While some poke fun at the “system” and how it seemed to somehow benefit public servants.

“That’s why everyone wants a government job. K-bye.” joked one commenter.

Leaked footage of the incident saw the suspect hitting the woman on the head and kicking her inside the lift before dragging her out by her hair.

Police investigations determined that the assault was set off by a misunderstanding between the suspect and the victim – a female matchmaking agent working for a service called ‘Matrimony’.

It’s said that the suspect had paid a sum of RM2,500 for the service and waited six months to still remain single.

The victim reportedly sustained injuries to the head and received treatment at a hospital following the assault.

Read More: ‘Public Servant’ Beats Up Matchmaking Agent After They Couldn’t Find Him A Match