The 68-year-old used to be a lorry driver and does GrabFood deliveries to earn a living. 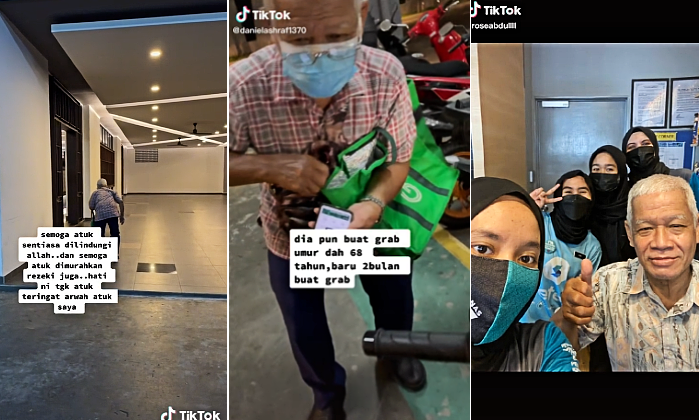 Malaysian’s were amazed by viral videos of a 68-year-old man who was spotted supposedly asking for directions while making a GrabFood delivery at a residence in the Klang Valley.

The video shared by TikTok user Ashraff Danny, who was also a Grab-rider himself, saw the senior citizen all hunched over while carrying the signature green Grab delivery bag towards the building’s entrance.

Ashraff said that he had the chance to chat with the man at a motorcycle parking lot, where the man told him that he had been making deliveries for about two months now.

“I was sad when he said he does Grab for a living. Before this, he was working as a lorry driver,” wrote Ashraff in the video captions, saying that the man reminded him of his late grandfather.

Ashraff was keen on meeting with the man again – who he says regularly works around the Damansara area.

Another TikTok user by the username roseabdullll later responded to Ashraff’s video revealing that the man was one of her favourite customers at the Petronas outlet in Sri Hartamas where she works and to whom the employees there affectionately refer to as ‘Abang Jek’ or ‘Atok’.

Though netizens were generally astonished and proud by the man’s diligence to continue working, others also felt a lil’ depressed at the fact that the senior still had to work in his golden years instead of retiring.

Previously it was reported that only 3% of the nation’s Employees Provident Fund (EPF) contributes have enough money to retire.

Finance Minister Tengku Datuk Seri Zafrul Tengku Abdul Aziz said that there are around 3.6 million EPF members who have savings of less than RM1,000 while some 6.1 million contributors currently have less than RM10,000 saved up for retirement after a total of RM101 billion in withdrawals were made through i-Lestari, i-Sinar, and i-Citra by Malaysians struggling through the pandemic.