Motorists can be charged fines of between RM50 – RM250 for not having side mirrors on their vehicles and between RM300 – RM3,000 for installing fancy plate numbers. 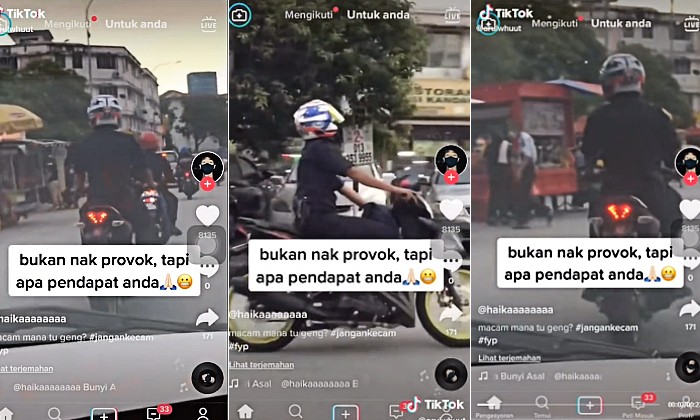 “No compromise,” said the police when one of their officers was issued with traffic summons after being spotted riding a motorcycle without any side mirrors and having “fancy” license plates on that’s not up to specifications.

Responding to a 21-second video first appearing on TikTok that showed a uniform patrol officer from the Ampang Police Station committing the traffic violations, Ampang Jaya Police Chief Mohamad Farouk Eshak told Harian Metro that they do not take such matters lightly and would reprimand any of its officers who disobey the law.

“Following the incident, we have taken legal actions against the officer by issuing traffic summons for both offences”

The TikTok video, which according to the user who originally posted it up, had allegedly been taken down after people reported on it.

But another user later reposted the clip which included a tacked on response by an unknown individual who seemed annoyed that the video was made public.

“Why is something like this made viral. So weird?” said the man, assumingly asking why an issue that seems small to him was made viral on social media.

Well, according to local automotive site Carlist.my, motorists can be fined between RM50 to RM250 for not having side mirrors on their vehicles.

While the Road Transport Department (JPJ) gives out summons amounting between RM300 to RM3,000 for vehicles that have fancy written number plates on them.