Prof Khatijah was the Deputy Secretary-General of the Ministry of Science, Technology and Innovation, won many awards and is finding a cure for cancer. 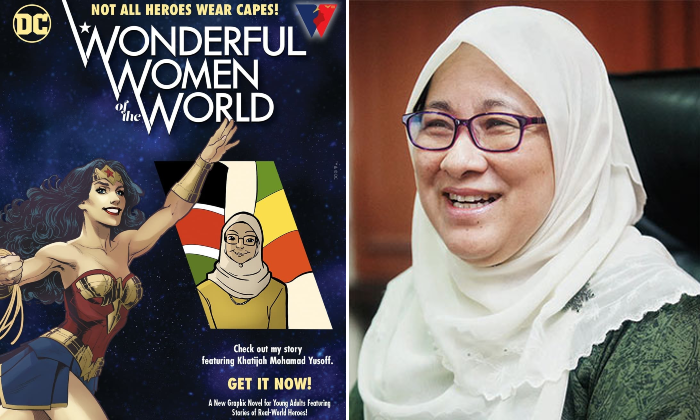 The graphic novel anthology titled, ‘Wonderful Women of the World’, featured real-life superwomen and their contributions to society.

The 202-page comic which came out in September 2021 was also written, illustrated and coloured by various female and non-binary people.

Split up into five sections, the anthology featured some of the most influential women around the world including superstar Beyoncé, sports star Serena Williams, super activist Greta Thunberg and many others representing strength, compassion, justice, truth and equality.

Prof Khatijah was featured in the ‘truth’ section of the comic where she was credited for “creating heroes from villains”.

According to CodeBlue, Prof Khatijah conducted extensive research on the Newcastle Disease Virus (NDV), a virus that infects poultry and is harmless to humans, that could work as a treatment for cancer.

Her study of NDV earned her the United Nations Educational, Scientific and Cultural Organization’s (UNESCO) Carlos J. Finlay science prize for microbiology in 2005 and other prestigious awards both locally and internationally.

The Penangite is credited as the first person ever to have sequenced the ‘L gene’ – an important enzyme involved in the replication of NDV – and is continuing her research on developing various ways or ‘delivery systems’ to kill cancer cells.

The professor was also the former Deputy Secretary-General of the Ministry of Science, Technology and Innovation (MOSTI) and part of the Office of the Science Advisor to the Prime Minister.

She was also said to have been responsible for establishing the National Science and Research Council, the Nanotechnology Directorate, the National Bioethics Council, and the National Institutes of Biotechnology, and was highly involved in drafting a range of science policies for the country.

“As a Malaysian woman myself, I couldn’t be more proud to illustrate the story of world-renowned microbiologist Datin Paduka Professor Khatijah Yusoff.” wrote artist Nur Hanie who was responsible for the wonderful illustrations featured in the comic, on social media.

The artist confessed that it has always been on her ‘bucket list’ to draw such a famous person.

Her work also received an honorary shout out on the Universiti Putra Malaysia (UPM) Facebook page, where Prof Khatijah used to lecture.